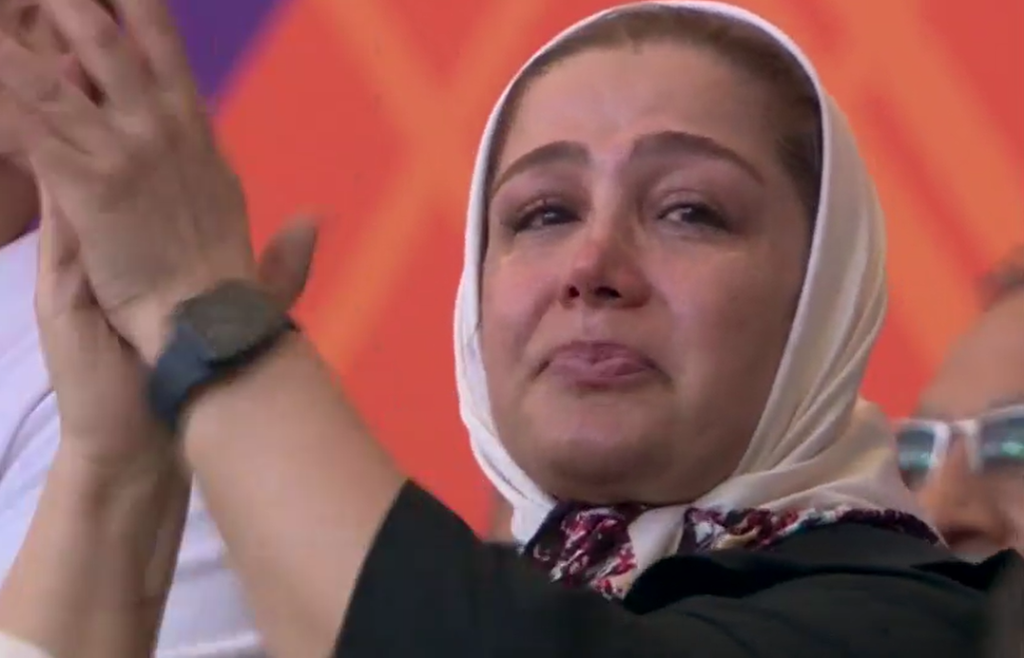 There were tears during the Iranian national anthem as the players made a statement (Picture: BBC)

There were emotional scenes ahead of Iran’s World Cup opener against England, with the players refusing to sing the national anthem and Iranian fans in tears as they made a statement against events in their country.

After the England players sung God Save the King, the Iran team stood silent during their own national anthem in a powerful statement.

The civil unrest continues in Iran after the death of Mahsa Amini sparked protests against the government, which have led to hundreds of deaths and thousands of imprisonments.

Some players had made their feelings known before the start of the World Cup campaign, backing the protesters at home.

Bayer Leverkusen striker Sardar Azmoun posted on Instagram: ‘At worst I’ll be dismissed from the national team. No problem. I’d sacrifice that for one hair on the heads of Iranian women.

‘This story will not be deleted. They can do whatever they want. Shame on you for killing so easily; long live Iranian women.’

Ehsan Hajsafi, the AEK Athens defender who has 121 caps and captains Iran, said at a press conference in Qatar: ‘They should know that we are with them. And we support them. And we sympathise with them regarding the conditions.

‘We have to accept the conditions in our country are not right and our people are not happy. We are here but it does not mean we should not be their voice or we should not respect them.’

Stock Market: Suez Canal Update! Floating!
Young rugby player took his own life after saying ‘love you’ to his mum

Charlotte Crosby devastated after death of grandmother she named daughter after: ‘I don’t think my world will ever be the same’