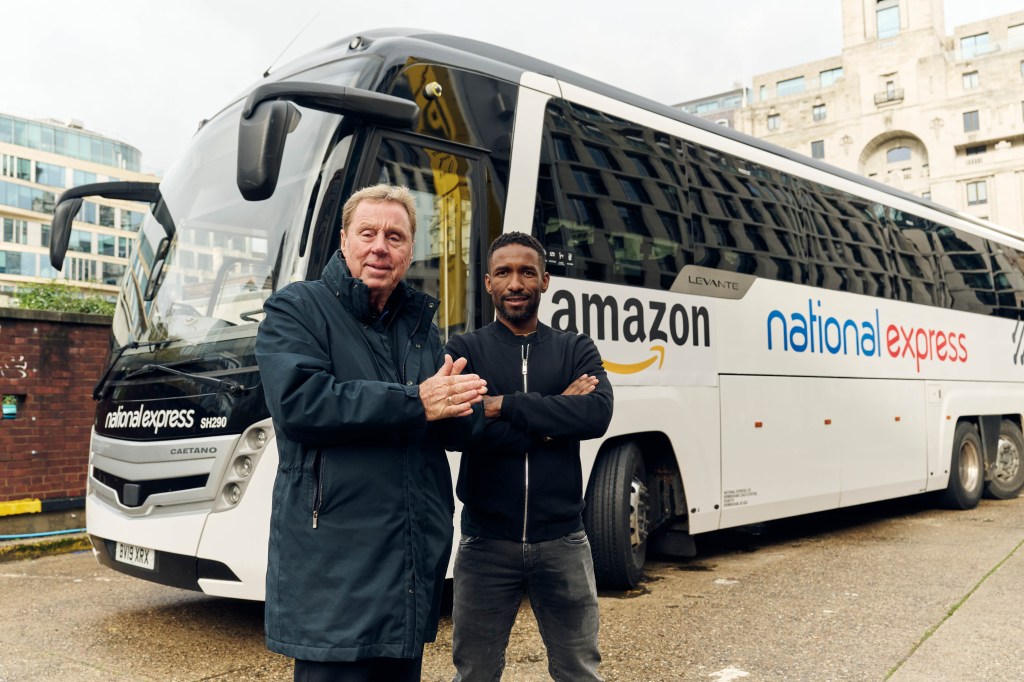 Harry Redknapp with Jermain Defoe after joining forces with Amazon to land the ‘deal’ and get students home via National Express coaches (Picture: Amazon)

Shopping: This article contains affiliate links. We will earn a small commission on purchases made through one of these links but this never influences our experts’ opinions. Products are tested and reviewed independently of commercial initiatives.

During this cost of living crisis it’s the students that are unusually hard done by with sky-rocketing rents, poor living conditions and a lack of time for a full-time job, to combat the soaring prices of food and essentials.

So with the average cost of travelling home for Christmas sitting at around £110, it’s no wonder that students are stressing about how they are going to make it home for the festivities.

In fact, more than a fifth of students are struggling to afford travel home, leaving them with the possibility of a lonely holiday.

But Christmas has come early in the form of Black Friday – with Amazon and National Express announcing 75% off 5,000 coach fares for students to reunite them with loved ones this year.

In this Black Friday first, the Prime Student travel deal could get students back to their family home for as little as £2.

It’s the biggest discount that Amazon and National Express have offered Prime Student members – increased from the 15% off available all year round.

Harry Redknapp and Jermain Defoe have partnered with Amazon to promote the Black Friday deal.

Harry said: ‘Chuffed to see Amazon and National Express team up to deliver thousands of students home this Christmas season for as little as two quid.

‘Best bit of business since I signed Jermain. All three times.’

Princess Diaries 3: Here’s how to dress like Mia Thermopolis in 2022

With three quarters of students saying they’ve had to cut back on wholesome trips home in the past 12 months, it’s about time they caught a break.

In fact, more than half of students admitted to feeling anxious about money this festive season, which certainly isn’t in the spirit of Christmas.

As a result, the discounted National Express coach fares are available to purchase from November 25 until December 9.

MORE : An expert reveals how to recession-proof your money

Stock Market: Suez Canal Update! Floating!
Gusts of up to 80mph and temperatures of -4°C to hit UK from today

Back of the Yards group wants to create family hub with affordable housing, health care and more: ‘This is what we need’

Who invented the toaster and when?