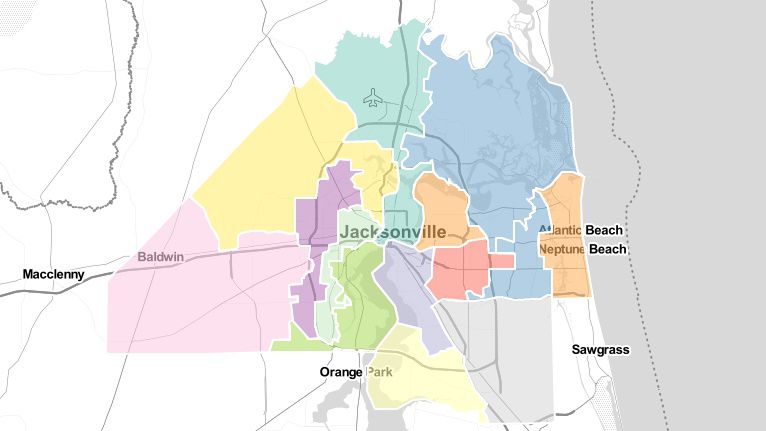 Details within this story have been updated following a federal judge’s ruling filed Oct. 12, 2022, and the new redistricting process that followed.

A federal judge moved to throw out Jacksonville’s newly-drawn city council and school board district map.

A proposed map was created in the fall of 2021, based on new Census data for the county. The graphic below shows the approved map (now thrown out by the judge), and what districts looked like before.

The more significant shifts in boundaries were on the Southside near the St. Johns Town Center and UNF, in the Bartram area, and on parts of the Northside.

Following the creation of the map, public hearings were held in early 2022 to gather input from residents. The council’s Rules Committee approved the map in March, making one slight adjustment to the lines between Districts 3 and 13.

On March 22, the City Council voted 17-1 to approve the redistricting plan. A judge on Oct. 12 threw the plan out and called for a new map by Nov. 8. The City Council says it will fight the ruling. On October 25, the plaintiffs from the federal lawsuit submitted a proposed map known as the Unity Map for the City Council’s consideration.

Following a series of hearings, the City Council approved a map known as “Maroon III E Fix” on Nov. 4, and submitted it to the court by the Nov. 8 deadline. On Nov. 18, the plaintiffs filed their objections to the city’s newest proposal, arguing it continued to “entrench racial gerrymandering.” Along with the response, the plaintiffs submitted three new maps of their own, designated P1, P2 and P3.