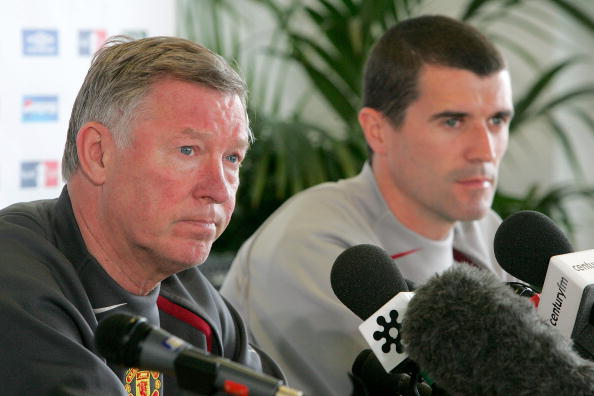 Roy Keane has hit out at Sir Alex Ferguson for his ‘bizarre’ attempts at blocking him from representing the Republic of Ireland.

The pair famously fell out in 2005, which saw Keane leave Manchester United in acrimonious circumstances after 12 years at the club.

Keane and Ferguson had formed a formidable partnership, with the midfielder perfectly representing the Scot on the pitch and embodying his never-say-die attitude.

But, before their final falling out, the pair clashed over Keane’s representation of his country.

Keane was made captain of the Republic of Ireland in 1998, the same year that he tore his Anterior Cruciate Ligament.

He worked tirelessly to return and did so for United’s treble-winning campaign in 1999 but he was often accused of missing Ireland friendlies.

But Keane says there was ‘bizarre’ pressure from Ferguson not to represent his country if there was the slightest indication of an injury.

‘I was under constant pressure when I was going away with Ireland from the Manchester United manager,’ said Keane.

‘Constantly told, you shouldn’t be going over.

‘Even if you weren’t injured and you had a little knock, they wouldn’t want you going, it was constant pressure.

‘I used to see other lads going away and it used to frustrate me, I always felt like they looked at Ireland as maybe not as important as England.

‘I thought the club and the manager had an issue with me going to play with Ireland and it used to drive me mad, and it put you under huge pressure. I found it very strange and bizarre why a manager would do that to any player.’

MORE : ‘Talent only gets you so far’ – Mark Allen sends message to Jack Lisowski after UK Championship semi-final epic

Mum feared burning to death after getting trapped inside sunbed