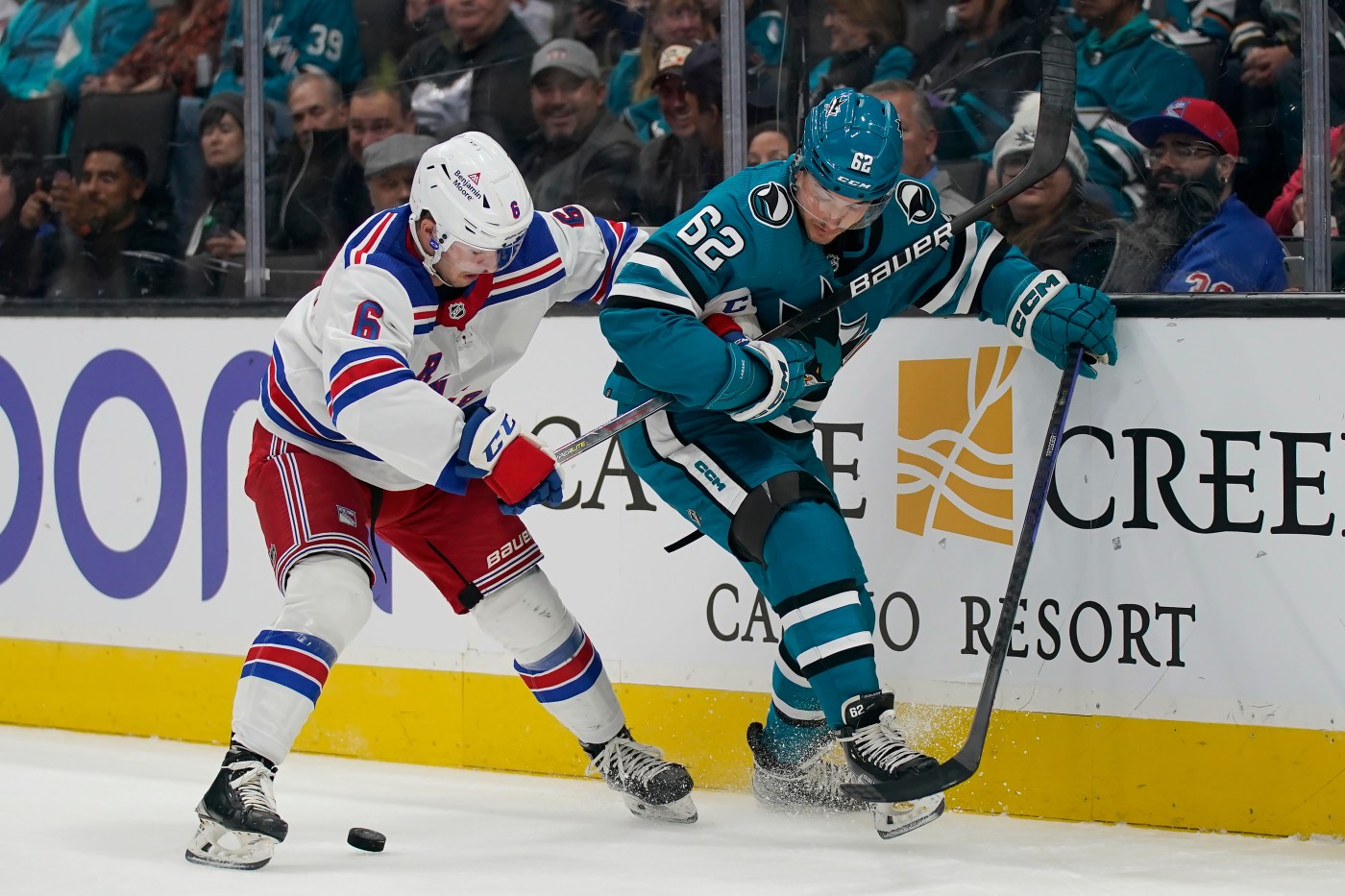 SAN JOSE – James Reimer did what he could Saturday to help the Sharks snap a lengthy losing streak on home ice. But the skaters in front of him didn’t offer up much in support.

Julien Gauthier scored at the 13:57 mark of the third period, the 40th shot that Reimer had faced up until that point, as the Sharks lost 2-1 to the New York Rangers on Saturday before an announced sellout crowd of 17,562 at SAP Center.

The Sharks managed just four shots on net in the third period, including Logan Couture’s goal with 16.1 seconds left in regulation time that helped his team avoid its first shutout of the season.

The Sharks are now 0-4-3 at home since a 4-3 overtime victory over the Toronto Maple Leafs on Oct. 27. That win remains the Sharks’ only victory at SAP Center, as they now own a 1-6-3 record this season at the downtown arena.

Adam Fox scored an empty net goal with 1:07 in the third period for the Rangers. Reimer finished with 41 saves.

Reimer made 15 saves in the first period, one more save than he had throughout Thursday’s game with the Detroit Red Wings in the Sharks’ 7-4 loss that began a three-game homestand.

Against the Red Wings, Reimer stopped 14 of 20 shots, and just four of seven in the third period as the Sharks allowed the final three goals of the game after staging an impressive comeback from a two-goal deficit.

Of Reimer’s 27 saves in the first two periods Saturday, five came while shorthanded as the Sharks killed all three penalties they took in the first 40 minutes. The Sharks entered Saturday with the top-ranked power play in the NHL at 92 percent and went 5-for-5 on the kill in their last meeting with the Rangers on Oct. 20.

In that game, Karlsson scored the overtime winner and had an assist in the Sharks’ 3-2 victory at Madison Square Garden, snapping what was the team’s five-game skid to start the season. Including that win, the Sharks, before Saturday, had a 6-5-3 record since an 0-5-0 start.

If the Sharks are able to climb back into the playoff picture, perhaps they’ll look back at an Oct. 19 practice in New York as something of a turning point.

The Sharks had been blown out 5-2 by the New York Islanders the night before for their fifth straight loss. The day before the game, coach David Quinn and captain Logan Couture sat down to talk about how urgent the team’s situation had become, and how much better they needed to be from a practice standpoint.

“If we’re going to get out of this is when practice ends, you want to feel good about what you’re trying to accomplish in your mental and physical effort,” Quinn said. “But you’ve got to watch your teammates do the same thing. That’s the only way to acquire team confidence.”

Quinn said in his playing days when he practiced and wasn’t in a particular drill, he’d watch and notice when passes weren’t …read more

How did California yo-yo from a $100 billion surplus to a projected $25 billion shortfall — in just one year?