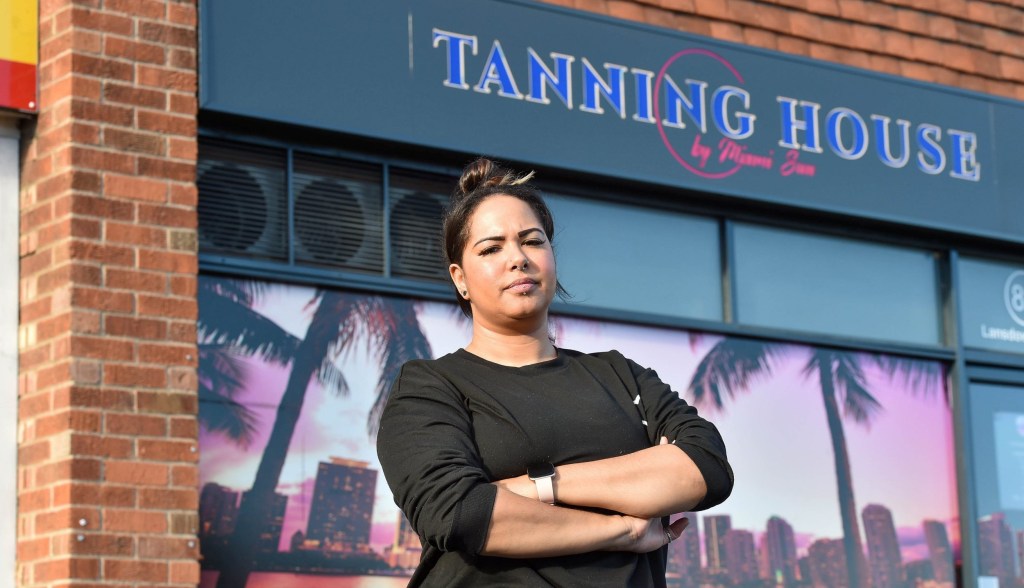 A mother-of-four has revealed how she feared for her life after becoming trapped in a sunbed.

Natalie Rene, 33, said she first suspected a problem when the lid slammed shut as she lowered herself onto the bed at a salon in Loughborough, Leicestershire.

When she realised it wouldn’t open again she began panicking and mashed a button to switched off the UV lights which can cause dangerous skin burns and raise the risk of cancer after too much exposure.

‘I thought this was going to be my coffin,’ she said, adding that she feared she would ‘burn to death’.

‘I’m really strong but I just couldn’t lift the lid off me. I had literally an inch or so and all I could do was shimmy a little side to side.

‘I’m not good with small spaces and my anxiety went through the roof. I thought I’d get crushed – if not burned to death. Then they’d have to drag my naked body out.’

The lights only turned off but only ‘after what seemed like ages’, Natalie recalled, during which she cried out for help.

After about five minutes, two members of staff came to the rescue, Natalie added, but they couldn’t help.

The owner of the salon has not commented on the incident (Picture: SWNS)

Two more customers joined in but called 999 after realising their efforts were in vain.

Firefighters arrived and freed Natalie while she covered herself with a sheet of paper.

Natalie said: ‘We would have been so screwed if it hadn’t been for those two women [customers] – they helped me so much.

‘They were a godsend. I am so utterly grateful to them. They were the only ones who could think straight.

‘Apparently the sunbed had just been serviced – but the firemen said the hinges had completely gone.’

The owner of the venue, Tanning House by Miami Sun, did not comment on the incident.