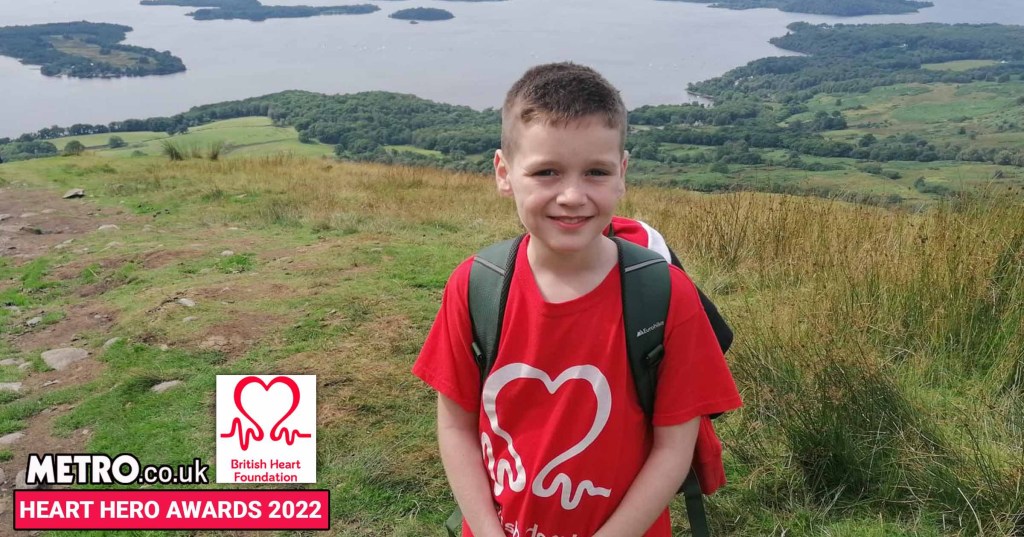 ‘We just couldn’t believe it. Within minutes your life can just change, and that is what happened to our family.’

When Connor Beck was eight years old, his beloved uncle John Clark died from a sudden cardiac arrest. He was just 34.

Mum Michelle Clark, 33, said: ‘We had no indication, no warning, there were no symptoms.

‘John had flown to America for a wedding and while he was there had a sudden, fatal cardiac arrest. One minute he was here and the next he was gone.

‘When these things happen you don’t know how to cope, nothing in life prepares you for losing someone, especially so young.’

The Scottish family were left reeling from their sudden loss – and after his death in 2019, relatives were coming up with ideas to ‘keep Uncle John’s spirit alive’.

Nephew Connor quickly remembered how John had been a huge supporter of the British Heart Foundation (BHF) in his lifetime.

In the months before his death, John had taken part in the Glasgow to Falkirk Trek – a 100km sponsored walk along the Forth and Clyde and Union Canals, from Scotland’s largest city via the iconic Falkirk Wheel to the capital.

So Connor decided to pay tribute to John on what would have been his 35th birthday – September 19 – and cycle 35km in his memory.

‘He raised more than £3,000 and he hasn’t stopped fundraising since,’ said Michelle proudly.

Connor, now 11, and attends Newmains Primary School in Renfrew, said: ‘My Uncle John was kind, helpful and funny and I loved going to the football with him.

‘He took me to see Celtic playing Barcelona and it was brilliant. I miss him a lot.’

It starts in Glasgow and ends in Fort William, and is a challenge even for fit adults.

Accompanied by his dad Brian, other family members and his friend Evan McCrone, he walked the route in stages over five weekends, again completing the challenge on John’s birthday.

‘The hills on the West Highland Way are steep and really rocky,’ said Connor.

‘There were some really high bits and it did take a long time to do. It was a very hard challenge but probably my favourite one.’

To date, he has raised almost £10,000 for the BHF and his achievements have even been praised in the Scottish Parliament.