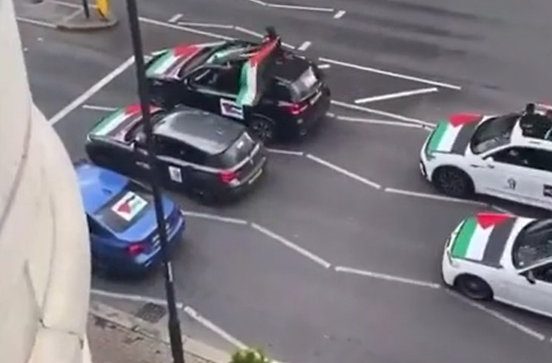 All men arrested for allegedly being part of a convoy of cars that drove through London shouting hate towards Jews on a loudspeaker have had charges dropped.

The Crown Prosecution Service said there was not enough evidence to prosecute any of the four men detained.

Footage of the incident on Finchley Road in north London in March last year went viral, with even then prime minister Boris Johnson condemning the scenes.

The Metropolitan Police announced they had identified the vehicle and four men were arrested on suspicion of racially aggravated public order offences and were released on bail.

The Campaign Against Antisemitism (CAA) has condemned the decision to drop charges.

A CAA spokesman said: ‘The Director of Public Prosecutions must immediately explain this decision or resign.

‘If the CPS is incapable of bringing to justice the people who drove through London in broad daylight on camera calling for the rape of Jewish women and girls, then it has reached the absolute pinnacle of pointlessness.’

The men, who denied wrongdoing, had been charged with using threatening, abusive or insulting words, or behaviour, with intent, likely to stir up racial hatred, but the cases will not go to trial.

Nick Price, CPS head of special crime and counter terrorism division, said: “This was a shocking incident, and we know how disappointing this decision will be for the Jewish community.

‘Throughout this case, we have worked hard with the police to identify those filmed and the extent of their involvement.

‘However, upon reviewing the evidence it has become clear we would not be able to prove to a court that one of the two charged individuals was in the car at the time of the captured footage.

‘We could also not demonstrate that the second person had participated in the conduct to the criminal standard.

‘We will continue to work with the Jewish community to rebuild trust. Anyone who sees hate crime should report it to police. We will prosecute all cases where there is sufficient evidence to do so.’

The videos showed a convoy of cars covered with Palestinian flags driving through north London, with passengers heard to shout offensive language and threats including ‘F*** the Jews, rape their daughters’.

Mr Johnson said at the time: ‘Ahead of Shavuot, I stand with Britain’s Jews who should not have to endure the type of shameful racism we have seen today.’

The Board of Deputies of British Jews said: ‘The Crown Prosecution Service is effectively stating by its decision that …read more