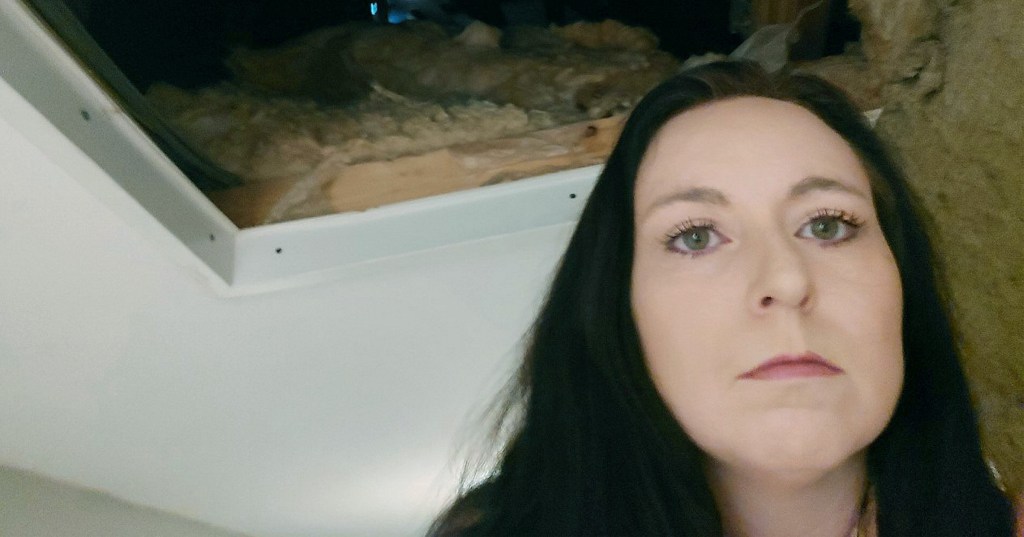 The hole is having an impact on the family’s health (Picture: Natasha Tomlinson/SWNS)

A mum and her two sons have been left freezing cold and struggling to sleep because there is a massive gaping hole in their roof.

The problem first started in Natasha Tomlinson’s flat in Ramsgate, Kent, in February and she has reported the issue to her housing association several times.

The huge hole exposes her loft to the elements and leaves insulation and material flapping in the wind.

The 29-year-old mum, who has two sons aged seven and nine, says it is impacting the health of all of them.

Natasha talked about the impact it’s had on her youngest son, saying: ‘He has a bad chest and uses an asthma pump due to allergies.

‘He has had to use it a lot more since this happened.

‘He also had a sickness bug not long ago – usually his temperature would rise, but it was so cold in the flat it dropped to 34.5C.’

The mum, who suffers with anxiety, says this has been made worse because of the wind now blowing through her home.

The family hear banging above their bedrooms when the wind is strong (Picture: Natasha Tomlinson/ SWNS)

She also has suspected fibromyalgia, a condition which causes widespread pain and extreme tiredness.

She added: ‘There’s banging above our bedroom – it is so loud in the wind.

‘Me and my youngest can’t sleep.

‘I get stiff muscles and it takes me a while to get out of bed – the cold makes it worse.’

The hole has now spread into the communal hallway of her building and has caused heavy leaks over the past few days because of the rain.

With energy prices rising, the mum is also struggling to keep the house warm.

Open gaps in the loft have prove to be a problem too (Picture: SWNS/Natasha Tomlinson)

Orbit Housing initially said the roof was repaired on May 23, with Natasha not reporting any issues after this until November 4.

But when shown screenshots of call logs and texts confirming the problems had been reported repeatedly, the firm sent a revised statement.

It said: ‘We sincerely apologise for the delay in completing the required works on the communal roof and the customers’ property.

‘A specialist contractor has been appointed to complete the works as soon as possible.’

Women in Afghanistan ‘banned from watching World Cup in public’

War veteran, 99, finally reunited with French girl he gave food to 78 years ago

Housing conditions are in the spotlight at the moment after the death of two-year-old Awaab Ishak who died from a respiratory condition caused by mould in a one-bedroom flat where he lived with his parents in Rochdale.

Awaab’s parents had previously complained to Rochdale Boroughwide Housing (RBH) about the condition of the home, an inquest at Rochdale Coroner’s Court was told.