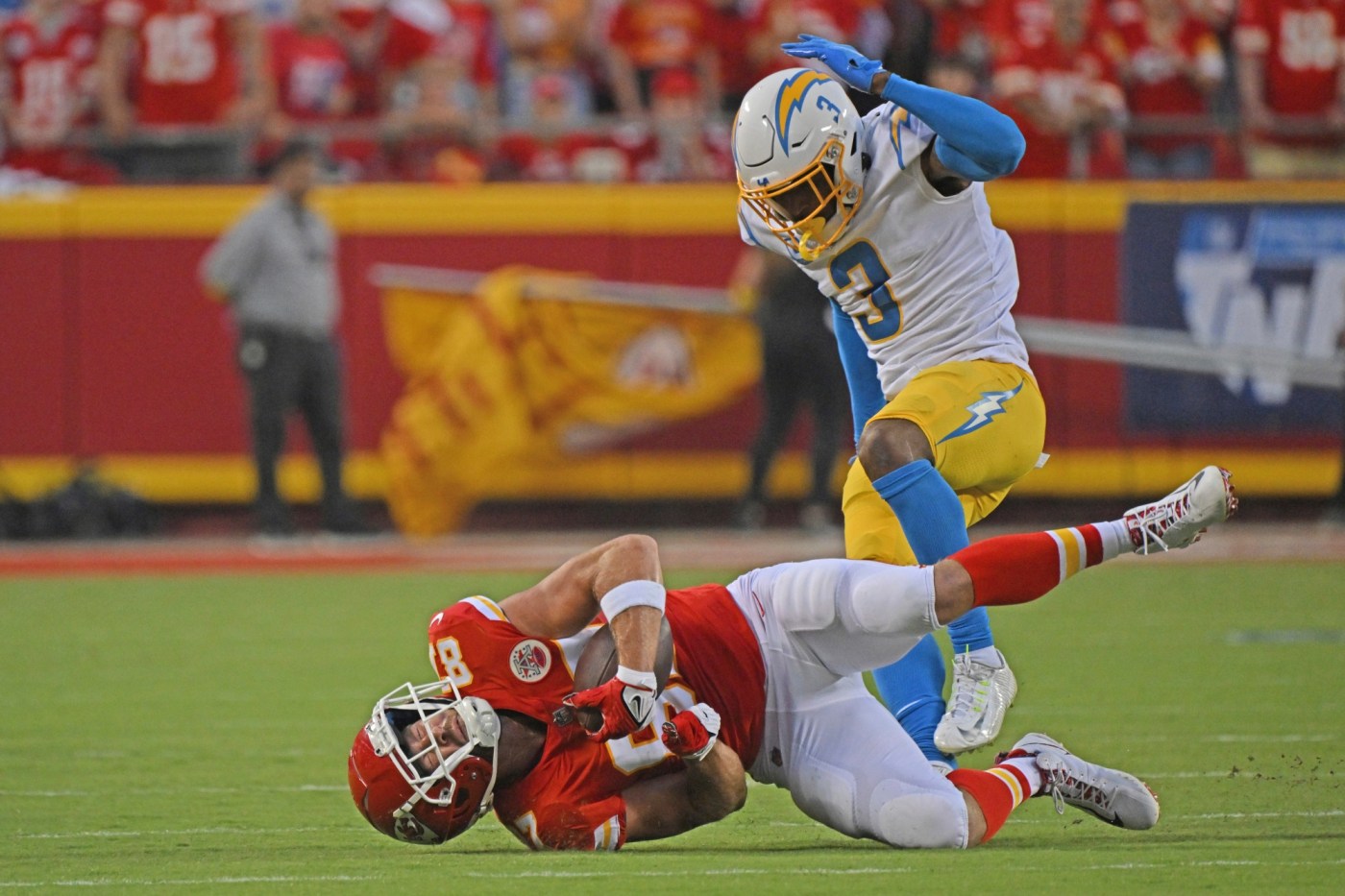 It was bound to happen, a meeting – no, a collision – of two of the most dynamic players on the field on that warm Thursday night in September in Kansas City, Mo. When they did cross paths, it resulted in a tackle seen, heard and felt around the football universe.

Chargers safety Derwin James Jr. picked up Chiefs tight end Travis Kelce and body-slammed him to the Arrowhead Stadium turf, prompting what seemed like an endless stream of “Whoa, did you see that?” responses in the building, in homes from coast-to-coast and across social media.

Kelce was running for an apparent touchdown after catching a pass from Chiefs quarterback Patrick Mahomes when James intercepted him near the goal line. Kelce went up and then came down with a thud as James slammed him to the ground. No malice was intended, both said later.

The tackle was viewed more than a half-million times on YouTube, and maybe a few thousand more this weekend, with the Chargers and James and the Chiefs and Kelce set for a rematch on Sunday Night Football at SoFi Stadium. Not that either player is expecting a repeat, mind you.

“See, y’all are trying to hype that,” James said, laughing when questioned recently about the most memorable of his Chargers-leading 85 tackles this season, also tops among all NFL defensive backs. “It’s always fun playing against Kelce. He knows who I am. I know who he is. It’s a lot of fun.”

Kelce revisited the WWE-style tackle on his light-hearted podcast with his brother Jason, a center for the Philadelphia Eagles. Jason jokingly asked if Travis would come out in wrestling attire for Sunday’s game in a humorous attempt to better protect himself from another body slam.

“I’m going to have the leather diaper, my high leather boots, maybe some wristbands and get the Rock’s elbow pads,” Travis joked before adopting a slightly more serious tone. “Me jumping over people is dying down. I landed on my head two games ago and I’m still feeling that (expletive).

“It’s funny. When you get flipped like that, everything freezes. Time freezes. There’s so much going through your head and it’s right before you hit the ground. It freezes like an old ‘Saved by the Bell’ (episode). It’s like everything freezes and you’re talking into the camera about the situation that’s about to occur.

The teams have gone in different directions since James’ tackle of Kelce, with the Chiefs using their 27-24 victory Sept. 15 over the Chargers on Thursday Night Football as a springboard to an AFC-leading 7-2 record. The Chargers (5-4) have suffered one significant injury after another.

There is a great deal at stake for both teams, especially for the Chargers, who are hoping to welcome several key players back into their starting lineup after extended layoffs because of injuries, including standout wide receivers Keenan Allen (hamstring) and Mike Williams (ankle).

Kristen Wiig “Looks Frazzled” With Ricky Martin on the Beach