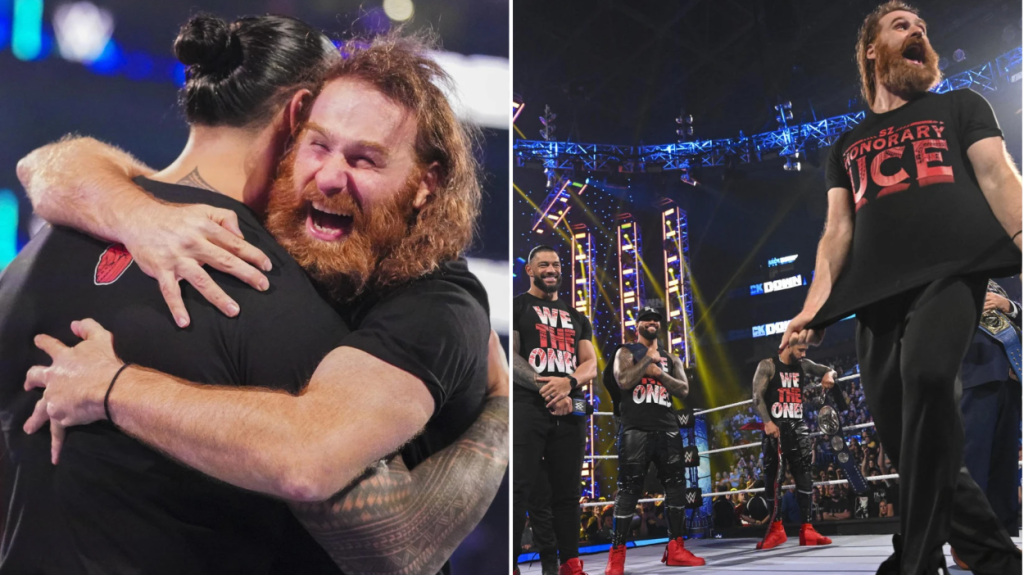 WWE SmackDown hit the right notes this week as Sami Zayn was officially recognised as the Honorary Uce.

The Bloodline bookended a fun show, kicking things off with Paul Heyman on fine form before things started to get tense between Roman Reigns and Zayn, with fans clearly nervous about what was to come.

The Tribal Chief seemed to be starting to turn on the former Intercontinental Champion, questioning why they kept him around wearing a Bloodline t-shirt.

Jey Uso went over to tear the shirt off him but any fears of a beat down were alleviated when the Head of the Table presented Sami with his own top, as he officially became the Honorary Uce and left with the rest of the faction.

In the main event, Jimmy and Jey Uso successfully defend the Undisputed WWE Tag Team Titles against the Brawling Brutes duo of Ridge Holland and Butch.

The match itself was absolutely brilliant with a lot of meat to sink your teeth into, with Sami trash talking and even trying to get involved late in the match.

Sheamus was there to stop him, but he got laid out by Imperium, with the trio’s actions causing a distraction and leading to the Usos’ retaining the gold.

The Bloodline still remains one of the current wrestling landscape’s most entertaining and rewarding storylines.

Another White Rabbit clue, Liv Morgan gets extreme and more

The first match of the night saw Liv Morgan beat Lacey Evans in a competitive and entertaining non-title bout.

Following her win, the SmackDown Women’s Champion battered her opponent with a kendo stick and hit a senton from the top rope through a table on the outside, showing she has what it takes to match Ronda Rousey at Extreme Rules on October 8.

In tag team action, The New Day beat Maximum Male Models due to an accidental distraction from Maxxine Dupri, with her brother Max slamming his jacket down.

As hard as everyone involved is working, MMM just isn’t clicking as it appeared to be early on, and the hope here will be LA Knight getting a main roster run.

Braun Strowman continued to build momentum with a great win over Otis in a battle of the big lads, with Chad Gable adding a wrinkle to proceedings.

Braun Strowman beat Otis in a battle of the big men (Picture: WWE)

The Monster Among Men looked great here, and he continues to make the decision to release him last summer seem ever more baffling by the week.

Drew McIntyre came out to address his ongoing feud with Karrion Kross, with the pair of them set to clash at Extreme Rules in a nasty Strap Match, but Kross tried to attack the Scottish Warrior from behind, only to find himself getting battered by the leather strap.

Scarlett distracted McIntyre with a fireball and her man was able to regain the advantage, laying …read more

How to keep your house warm this winter