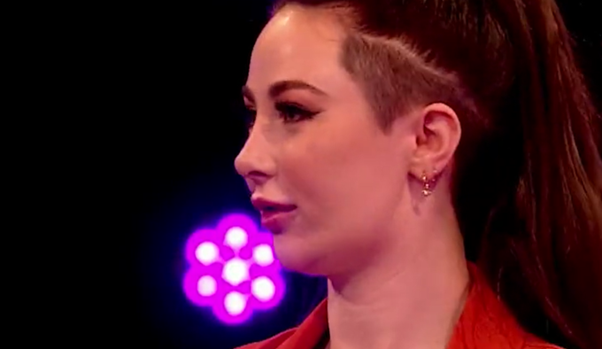 Nico had a task for the contestants (Picture: Channel 4)

A Naked Attraction singleton opted for quite a different approach to try and find her perfect date, by asking nude contestants to walk imaginary dogs.

For the uninitiated, the show asks contestants to pick one of six people to go on a date with, but the catch is all they have to judge by are body parts slowly being revealed.

In an episode airing on Thursday night, Nico joined host Anna Richardson to find a woman to date.

The singleton made it clear she was a dog-lover, being a groomer herself, and was pretty keen to take up Anna’s offer of seeing what the anonymous contestants would be like ‘handling a dog of their own.’

‘Girls, Nico is looking for somebody to go on walkies with her and her dogs, if you’re happy take those dogs for a walk Nico,’ Anna introduced, before Nico gave out orders of how the dogs were acting to see how the contestants reacted.

‘She’s a big dog,’ Nico quipped to the singletons, to see how they’d handle the invisible dog with the leads and collars they were given.

‘There’s a squirrel, careful, oh there’s a car, make sure you stop her! And there’s a poo…’ Nico continued.

If viewers weren’t already amused by that moment, later on, when Nico went on the date, they were left even more stunned when Gemma showed off her ‘party trick’.

Halfway through their dinner, Gemma got up from the table, placed her hands inside her top and clapped her breasts together loudly, leaving Nico in hysterics.

Viewers at home were left baffled by the moment, with one writing: ‘Did um…did that woman just stand up in the middle of a restaurant and clap her t*ts together?’

Another recent episode saw host Anna left completely gobsmacked with the size of a contestant’s penis.

36-year-old Rara from Hertfordshire was looking for her perfect man, but got more than she was bargaining for when Ozzy, who was posing in the blue box, showed off his ‘elephant trunk’.

The fetish model had been on the hunt for love, but was left speechless when she saw what Ozzy had to offer.

‘I think that’s too big. I’m very small down there,’ Rara shared.

Anna then commented: ‘Is that real?’ telling the cab driver from South London that it was one of the biggest penises ever seen on the show.

She even asked him if it was a ‘grower’, to which …read more

Protesters clash with police outside Iran embassy in London