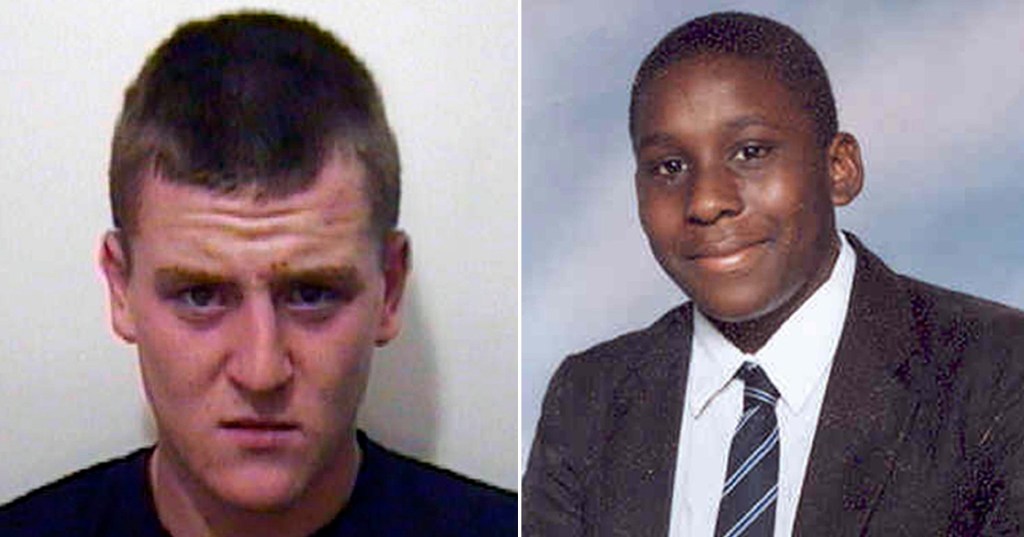 He was involved in the brutal killing of Anthony Walker (R) (Picture: PA/Getty)

A man who murdered Black teenager Anthony Walker in a barbaric racist attack is to be freed from jail on parole.

Michael Barton, the brother of former Premiership footballer Joey Barton, was 17 when he ambushed and assaulted Walker, 18, at a Huyton park in 2005.

Walker was walking his girlfriend Louise and cousin Marcus to a bus stop when Barton and his cousin, Paul Taylor, then 20, chased them into a park.

Louise and Marcus were able to escape but Walker’s life came to an end when Taylor struck the boy in the head with an ice pick, causing brain death.

Sentencing judge Justice Leveson at the time said the pair were guilty of ‘racist thuggery of a type that is poisonous to any civilised society’.

Taylor was ordered to serve 23 years and eight months in prison.

Officials at the time described Barton as withdrawn, violent and living a life fuelled by drugs and alcohol, according to Parole Board documents.

Barton’s initial sentence was reduced by eight months to 17 years in 2016 for turning into a charity fund-raiser behind bars. Judges noted his ‘remarkable transformation’.

Nearly two decades since the vicious attack, a now 34-year-old Barton may soon be released from prison.

Last year, he was moved to an open prison, which is one with less security and supervision.

The Parole Board, a body that assesses the potential risk of freeing prisoners, said yesterday its panel was ‘satisfied that Mr Barton was suitable for release’.

The panel said: ‘After considering the circumstances of his offending, the progress made while in custody and the evidence presented at the hearing, the panel was satisfied that Mr Barton was suitable for release.’

Panellists heard during parole hearings how Barton had begun taking part in courses on victim awareness and substance abuse.

His licence conditions include living in a designated address, a curfew and strict supervision and monitoring.

Who he can see and what he can do will also be limited, including observing an exclusion zone to avoid contact with victims.

Anthony Walker, a promising A-level student, was attacked with an axe (Picture: PA)

The Ministry of Justice has 21 days to review the Parole Board’s recommendation, it is understood.

In February, a spokesperson for the Anthony Walker Foundation said: ‘We are cognisant of the Parole Board’s impending decision regarding Michael Barton, who murdered Anthony in 2005.

‘Every anniversary, birthday, family-gathering and special occasion evokes a sense of never-ending loss, which will never go away.

‘Anthony was a fantastic son, who loved his family, friends and community. He loved his sports and was a keen basketball player.

‘Before his untimely death, Anthony wanted to …read more

Stock Market: Suez Canal Update! Floating!
‘I turned my life of addiction and £25k debt around and became a millionaire businessman’

Dear Abby: We fight every day about my husband’s bad weed habit

3 takeaways from Bears-Texans, including Dick Butkus improvising on the mic