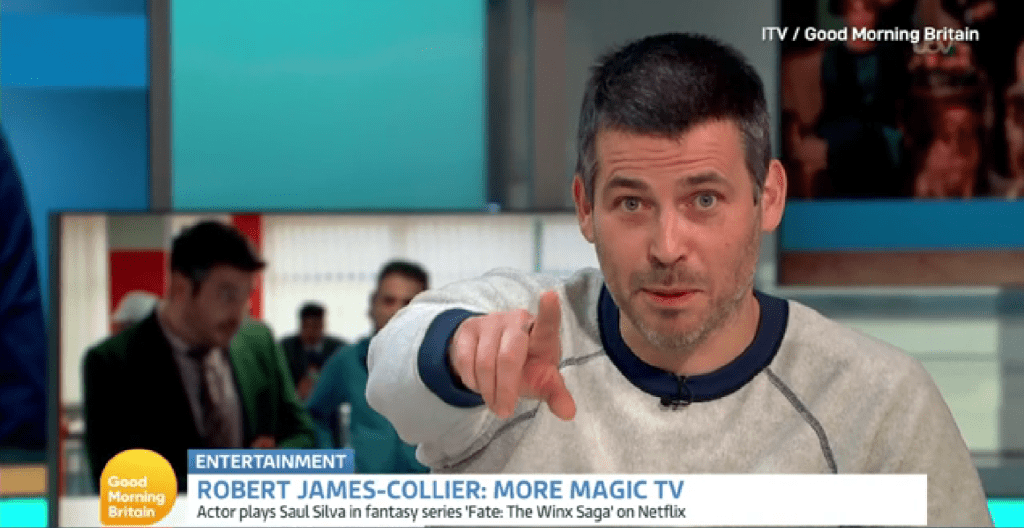 The Downton Abbey star was on the ITV breakfast show to promote the second season of Netflix’s dark fantasy series Fate: The Winx Saga, but it’s safe to say the interview didn’t go quite to plan.

Right from the off, Robert was asked to describe the show for people who might not have seen the first run of episodes but revealed he’d gone to his son Milo – who turns 13 today – for advice on the question, which he was expecting.

The actor revealed: ‘He went, “Don’t worry about it, I’ll give you something to say,” and then he told me what to say. I thought it was magical! I’m gonna read it out now, if I may?

‘I thought, “We’ve done something right here, he’s said something beautiful”. It might make some of the nation cry, so if I may, I’m just gonna read what he told me to say in response to the question, “Why should people watch Fate: The Winx Saga”?

‘Not that anyone can afford to at the minute, ’cause of the energy crisis! First point, “It’s about fairies, innit?” That’s his first point. Second point from Milo was, “It’s just like Harry Potter with an American twist”.

‘Thanks a lot Milo, no birthday presents for you! Useless! He’s getting nothing after that, he should have said something insightful! I opted to come here to publicise this show rather than be at home on my son’s birthday. I’m a bad parent!’

Robert wasn’t done there, describing his performance on the show as ‘strikingly monotone’ joking he has ‘an uncanny ability to make every line sound like the last’.

Conversation then turned to Downton Abbey, and the actor – known for his role as Thomas Barrow on the period drama – side-stepped a question about the show being something he’ll always be tied to.

He quipped: ‘No, not at home. Everyone just calls me dad!’

When it was mentioned that the late Queen Elizabeth II was a big fan of the show, he pointed out that Sir Mick Jagger also loves the series, and then insisted a potential return for the next film rests on co-star Dominic West.

Robert also had plenty of praise for GMB’s showbiz producer, calling for her to get a role in front of the camera, and he ranted about the show’s team member Josh for an interaction they had before coming on air.

He said: ‘Can I just say, your lovely guy who took me down here today, Josh, he’s a Downton Abbey fan. I said, “Josh, who’s your favourite?”, bearing in mind that I’m stood right in front of him.

Olivia Wilde on working with daughter Daisy in Don’t Worry Darling: ‘I loved that she was seeing me in that light’