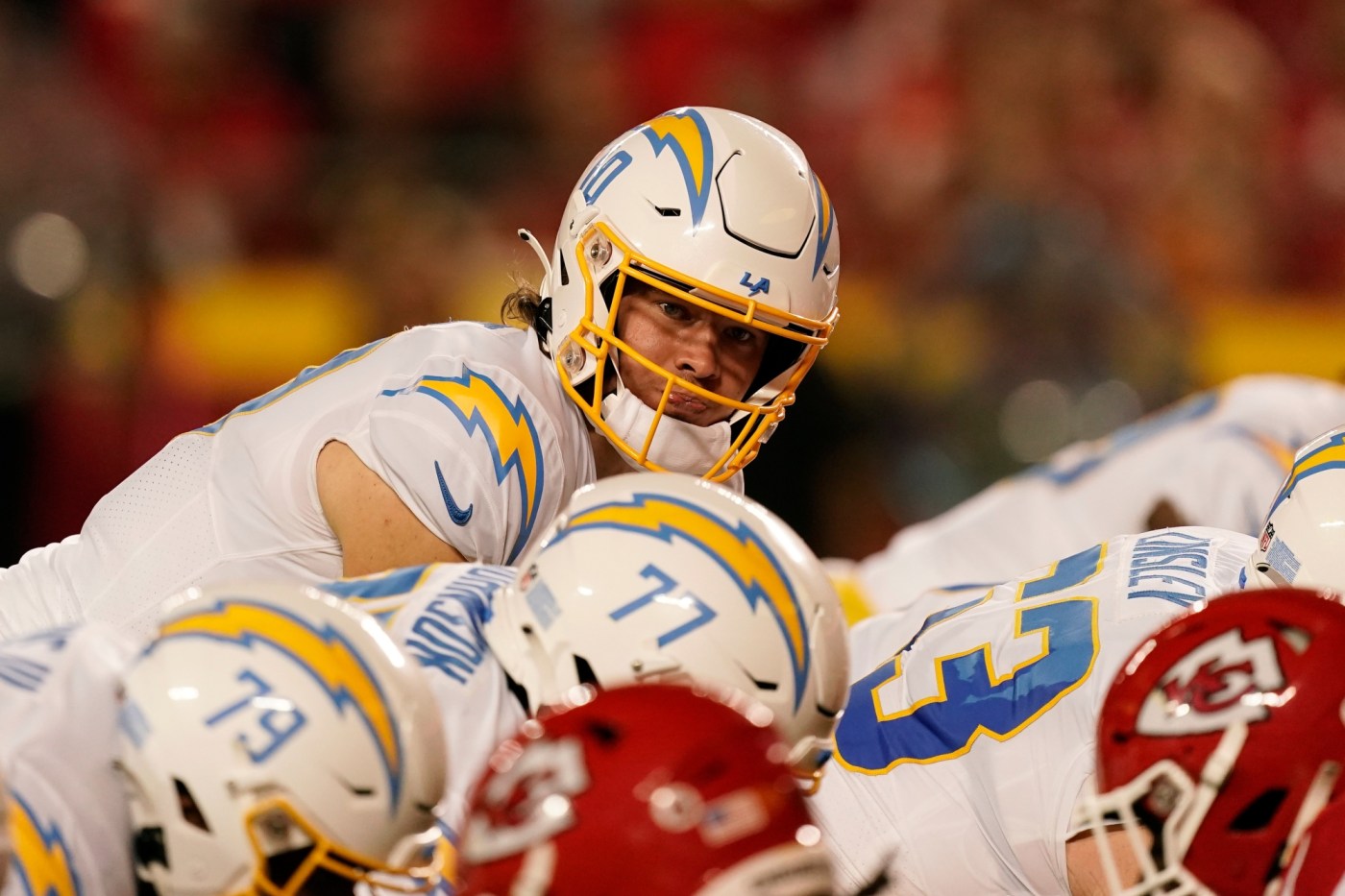 The Chargers on Friday listed Herbert as questionable to play Sunday against the Jacksonville Jaguars at SoFi Stadium because of fractured rib cartilage he suffered in last week’s loss to the Kansas City Chiefs. A decision on his availability might not be made until right before the kickoff.

Herbert didn’t throw a pass during the 20 minutes reporters were granted access to the Chargers’ practice Friday, one day after he threw a normal routine during the individual session. He showed no outward signs of discomfort Thursday while delivering on-target passes to his receivers.

Coach Brandon Staley said Chase Daniel would start in place of Herbert if Herbert can’t play against the Jaguars. Easton Stick would be the backup. Herbert has started 34 consecutive games since replacing Tyrod Taylor as the starter in Week 3 of his rookie season in 2020.

“I don’t know,” Herbert said when asked point blank if he believed he would play Sunday against Jacksonville “That’s a decision we have got a couple of days left to make. We don’t play today. We play on Sunday. So, whatever the plan is, I know our team’s going to be prepared to do everything we can. That decision will be made on Sunday, and we haven’t ruled anything out.”

Asked how he felt, Herbert said, “I feel good, thank you.” Asked what he felt on the play in which he was injured, he said, “I’d have to take another look at the film. I think I left the ball a little high, got tackled and fell.” Asked if a subsequent hit contributed to his injury, he said, “I don’t think so.”

“When I say day to day, I believe that,” Staley said of making a decision on Herbert’s availability in the minutes rather than hours or days before Sunday’s kickoff. “I think we’re prepared either way for contingencies. I think our coaching staff has done a good job of that and our players are prepared for that.

“So, that’s kind of the nature of what’s happening right now.”

Herbert has completed 72% of his passes (59 of 82) for 613 yards with three touchdowns and one interception to start the season. He threw three TDs in a victory over the Las Vegas Raiders in Week 1 and three TDs with one interception in a loss to the Chiefs in Week 2.

Daniel, a 13-year veteran backup, took one snap after Herbert was injured, handing off to running back Sony Michel for a four-yard gain. Herbert then returned to the game and later directed a 73-yard touchdown drive that cut the Chargers’ deficit to 27-24 with 1:11 remaining.

“At least, from a defensive standpoint, we haven’t really thought about it much,” Chargers edge rusher Joey Bosa said of the uncertainty surrounding Sunday’s starting quarterback. “It’s not going to change how we handle ourselves and how we play the game. I’m sure on the other side of the ball, they’re reeling a little bit more than us.

“I know Justin’s going to be smart, …read more

Miss Manners: I find these tasks for my boss inappropriate. Am I overreacting?