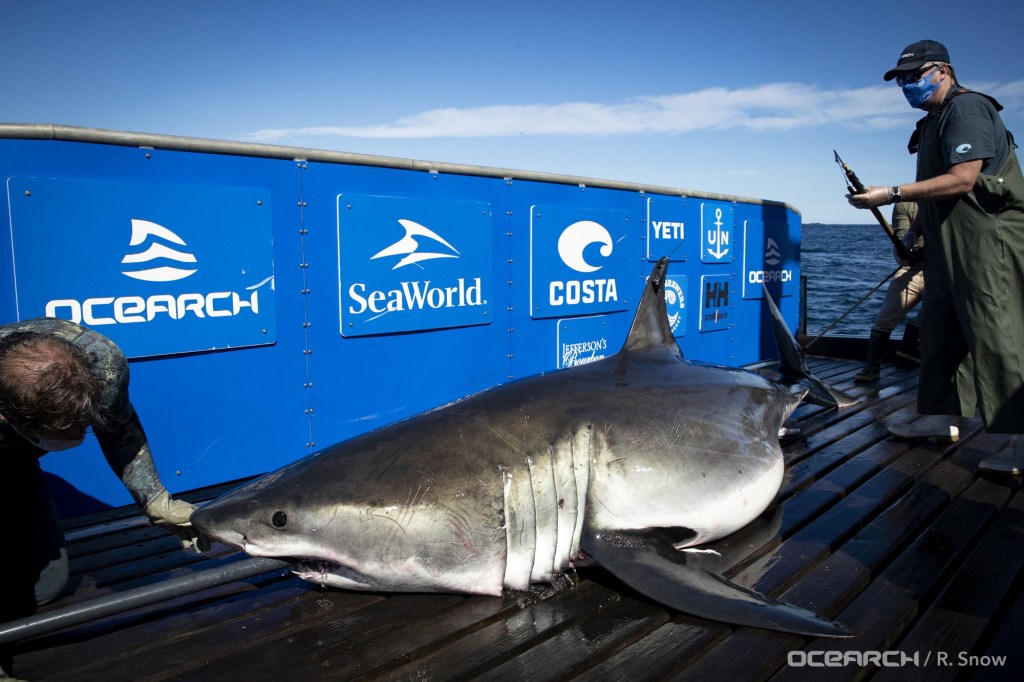 Breton the shark was tagged by conservation organisation Ocearch in Nova Scotia and has gone on to create his own self-portrait (Credits: Ocearch / SWNS)

A great white shark fitted with GPS tracker drew a ‘self-portrait’ in the Atlantic Ocean.

The 13-foot apex predator, named Breton, was the first shark to be tagged during and expedition to Nova Scotia by the charity OCEARCH in 2020.

Whenever he surfaces for sufficient time, the tag in his dorsal fin ‘pings’ a GPS location back to shark trackers at the science organisation.

The 1,437lb (651kg) creature has travelled along the east coast of the United States, including New Jersey, Virginia and South Carolina.

And his movements across the span of 444 days have even mapped out the shape of a shark.

Breton’s ‘self-portrait’, created from GPS pings that map his movements in the Atlantic (Credits: Ocearch / SWNS)

Breton’s location was first tagged on 12th September, 2020 at 1am at Scaterie Island, Nova Scotia.

Recently, he has been tagged on 21st September at 3.29am just off the coast of Baie de Plaisance in Quebec.

Although undeniably massive, Breton is actually about average size for a fully-grown great white.

The world’s largest predatory fish – and most famous of the sharks – can actually grow up to about 20-feet long and weigh over 5,000 pounds. Roughly the same as a small hatchback.

Despite their fearsome appearance, sharks are crucial to the health of the oceans.

Great white sharks are critical to the health of the world’s oceans but the species is under threat from overfishing and climate change (Credit: Getty)

Populations are shrinking due to combination of the international fishing industry and climate change.

The sharks that are left are increasingly coming into contact with larger human populations as warming oceans alter their distribution and movement.

1 dead, another wounded in Aurora shooting

What universities did the Royal Family attend?