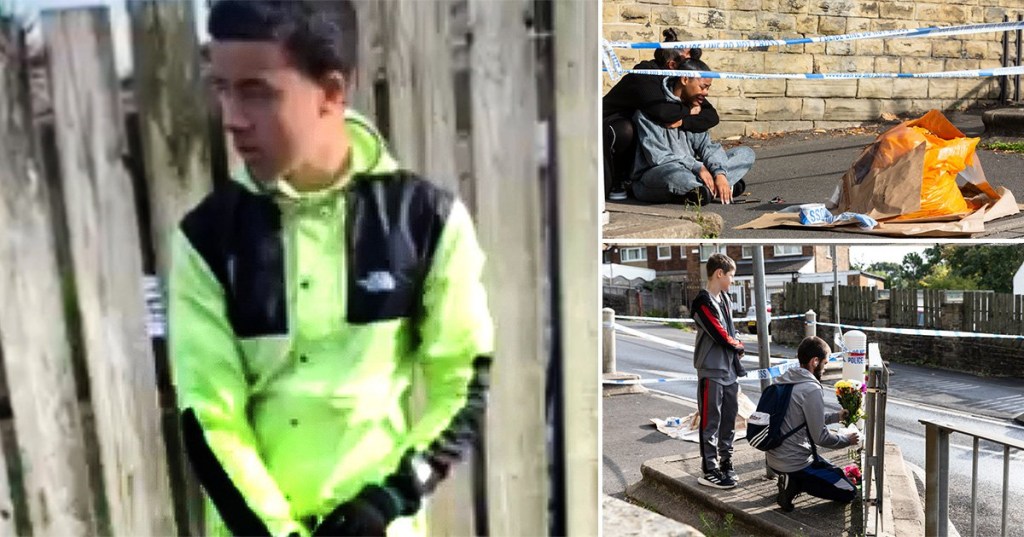 Khayri McClean was stabbed to death on his way home from school (Picture: SWNS)

Tributes have been paid to a teenage schoolboy who was stabbed to death by a masked knifeman outside of his school.

Khayri McClean, 15, was attacked outside of North Huddersfield Trust School in Woodhouse Hill.

Pupils and parents of the schoolboy left floral tributes and paid their respects to the teenager who was tragically killed.

The mother of his girlfriend said her daughter described him as ‘the perfect boy’.

Sherrin James, who left flowers at the scene in Huddersfield, West Yorkshire, said her daughter Shyana, 16, had been going out with Khayri for around eight months.

A card addressed to ‘Kharyi’ was left with the floral tributes outside the North Huddersfield Trust School, while a GoFundMe page has been set up to give Khayri ‘the best send off’.

Mr Fell said: ‘Our deepest sympathies go out to the pupil’s family and friends who must feel, as we do, completely devastated.

‘They have lost a loved one and we have lost a wonderful student from our school community.’

In a statement posted on the school website, Mr Fell continued: ‘It is with enormous sadness that I must tell you that following an incident on Woodhouse Hill Road yesterday one of our pupils has tragically lost their life.

‘The pupil was taken by ambulance to hospital after the incident but despite the most valiant of efforts, medical staff were unable to save their life.

This is truly shocking news for our pupils, your children, and our staff. We will be providing specialist support for any among our community who feel they could benefit.’

The statement explained that the school will not open until 10.30am this morning and then only to students who need support.

The victim was treated at the scene and taken to Leeds General Infirmary for emergency surgery, according to police.

The student was pronounced dead a short time later, and detectives from the force’s Homicide and Major Inquiry Team are leading the …read more