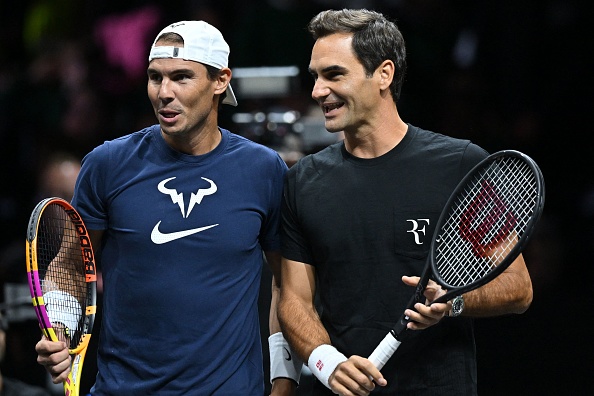 Roger Federer and Rafael Nadal will link up for one final time at the Laver Cup (Picture: GLYN KIRK/AFP via Getty Images)

Roger Federer will be playing doubles with Rafael Nadal at the Laver Cup this week in what will be the last ever game of his illustrious tennis career.

The 20-time Grand Slam champion will retire from the sport after the team competition, which takes places at the O2 Arena in London between September 23-25.

Federer will be joined by Rafael Nadal, Novak Djokovic and Andy Murray on Team Europe, with the so-called ‘Big Four’ on the same team for the first time in the competition’s history.

But when exactly is Federer’s last ever match? Let’s take a look.

What time are Roger Federer and Rafael Nadal playing at the Laver Cup?

Federer will be playing the fairytale doubles match with his great friend and rival Nadal on Day One.

The match will take place in the evening session on Friday, September 23.

The session will begin at 7pm with Andy Murray playing a singles tie against Team World’s Alex de Minaur.

Federer and Nadal have played doubles together before (Picture: Clive Brunskill/Getty Images for Laver Cup)

Federer and Nadal will then take on Jack Sock and Frances Tiafoe after the conclusion of Murray’s match, which could be around 8.30pm.

After the match, Federer will be replaced in the European squad by Matteo Berrettini.

What have Federer and Nadal said about playing with each other?

Speaking before his partnership with Nadal was announced, Federer said: ‘I think it would be a beautiful moment for two rivals getting together at the very end – and having played one more match together on the same side would be very special.’

The Swiss star added: ‘This one feels a whole lot different. I’m happy to have him on my team and not playing against him.

‘So here I am trying to prepare for one last doubles. I’m nervous going in because I haven’t played in so long.’

‘At the end, this moment will be difficult. I’m super-excited and grateful to play with him.

Federer will end his career with a dream doubles match alongside his great friend (Picture: GLYN KIRK/AFP via Getty Images)

‘For us as well to go through a career that we both have had and to come out on the other side and being able to have a nice relationship I think is maybe a great message as well to not just tennis but sports and maybe even beyond.’

How to watch on TV

The Laver Cup will be shown live in the UK on Eurosport and Discovery+.

A breakdown, a love triangle and a stalker: 8 huge Home and Away spoilers

Ellie Simmonds already targeted by trolls after Strictly Come Dancing debut: ‘It’s sad and it does get to you’