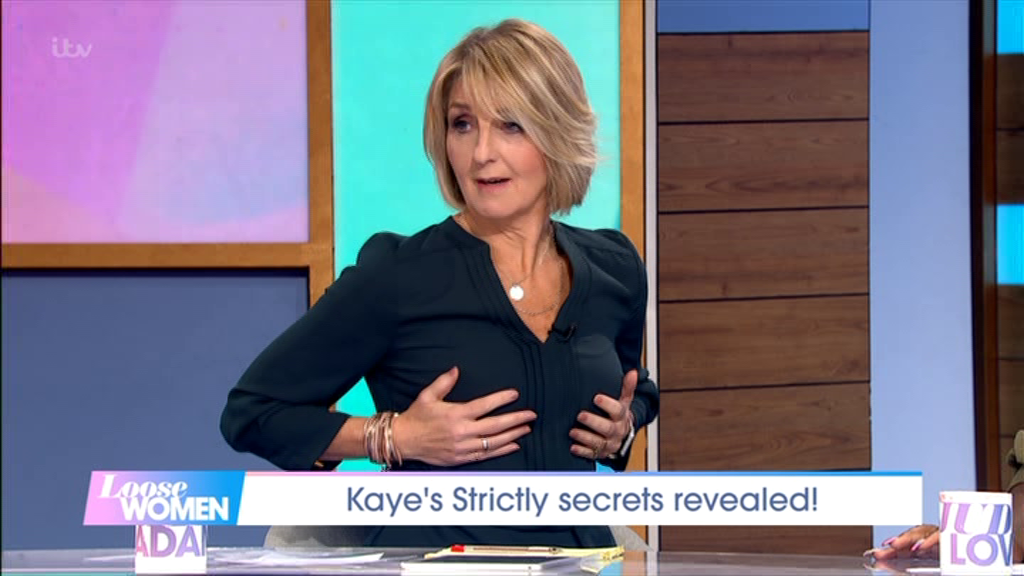 Kaye Adams has been left elated after learning her bra size has gone up while getting ready for the launch of Strictly Come Dancing 2022… but her Loose Women co-stars are less-than-convinced by her discovery.

This week, Kaye, 59, is set to make her debut on the BBC competition, joining the likes of Fleur East, Kym Marsh, Tony Adams and James Bye in the line-up.

Ahead of the start of the series, the broadcaster is understandably nervous, with the launch show set to take place on Friday followed by the first live show the following day… but she was left thrilled when having her measurements done in preparation.

On Thursday’s edition of Loose Women, Nadia Sawalha turned to her co-star as she said: ‘Kaye has discovered something about herself.’

‘Are you talking about…’ Kaye responded, before placing her hands over her chest.

Kaye then explained how when creating the outfits for the Strictly participants, ‘they measure you up’, as Judi Love – who competed on the show in 2021 – confirmed: ‘They go right in!’

Kaye was excited to share her news (Picture: ITV)
However, she quickly had to call out Nadia and Jane’s hysterics over her claim (Picture: ITV)

After Kaye told her colleagues that ‘you never go back once you have a built-in gusset’, she outlined how for several years she’s shared a ‘multi-pack of sports bras’ with her 15-year-old daughter, which are a size 36B.

However, after being measured up, it turned out the bra that fit her best was a significantly bigger size.

‘What am I? Have a guess!’ Kaye said excitedly to the panel and their live audience, before revealing she learnt she was actually a 32DD.

Kaye quickly realised that her Loose Women co-stars Nadia and Jane Moore were struggling to believe that was her size, pointing at them as she exclaimed: ‘Excuse me!’

Nadia giggled as she compared her bra size to her co-star’s (Picture: ITV)
It’s not long until Kaye will take to the dancefloor for the first time (Picture: Ray Burmiston/PA)

After hearing Nadia’s incredulity over the revelation, Kaye quipped: ‘That is the arrogance of a big-breasted woman.’

‘I’ve even got the producer in my ear telling me I’m not a double D,’ Kaye admitted, having heard Nadia say that the reason for her disbelief was that she was also a DD.

Nonetheless, later on, Nadia had to face remarks from audience members expressing their belief that she should wear a bigger bra, admitting that she’s reluctant to go up to a size F.

Katie Price rules out having cosmetic surgery on her vagina: ‘Mine’s fine’

It has come to this: Reeling White Sox aiming for winning record, second place