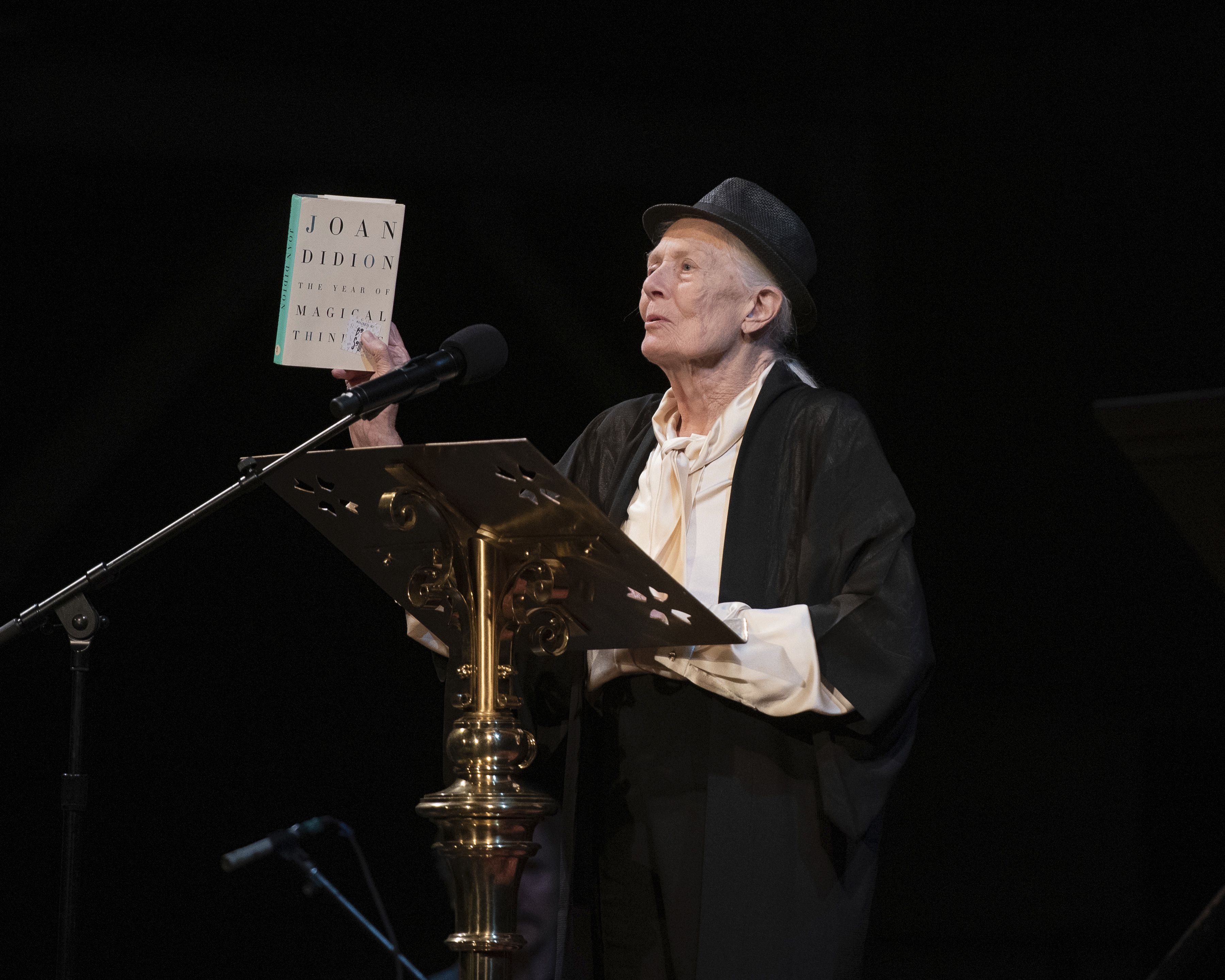 Joan Didion’s precision with words extended even to ones she would never live to hear, such as those used during a small, private service this spring at the Cathedral of St. John the Divine.

“She left very clear directions about what she wanted to happen at that service,” the Very Rev. Patrick Malloy said Wednesday night, at the start of a memorial tribute at the Cathedral. “She wanted it to be very brief and she specified the texts she wanted us to use, all from the Episcopal Book of Common Prayer, which is what you’d expect from an Episcopalian who wrote a book called ‘A Book of Common Prayer.’”

The texts she chose were “remarkably dour,” Malloy went on to explain, and they were not from the contemporary edition of the Book of Common Prayer, but from an older, more ornate printing. It was Didion’s way of reminding everyone that the sounds of the words, and their rhythm, meant as much as the words themselves.

Didion, a master of rhythm and of the meaning of the unsaid, was remembered Wednesday as an inspiring and fearless writer and valued, exacting and sometimes eccentric friend, the kind who didn’t like to speak on the phone unless asked to or who might serve chocolate soufflés at a child’s birthday party because she didn’t know how to bake a cake.

Hundreds were presented with programs and laminated hand fans as they entered the Cathedral on a summer-ish late afternoon — the first day of autumn — where the scale of the building was too vast for the expense of air conditioning. Carl Bernstein, Donna Tartt and Fran Lebowitz were among those attending, along with relatives, friends and editors and other colleagues from The New Yorker and her last publishing house, Penguin Random House.

Didion, who died last December at age 87, left behind no immediate family members: Her husband, fellow author and screenwriting partner John Gregory Dunne died in 2003, followed less than two years later by their only child, Quintana Roo. But the speakers did span much of her life, from Sacramento and Malibu in California to the Upper Side East of Manhattan, from her years as a child already preoccupied with language to her prime as an uncommonly astute observer of contemporary society to her time as an elder sage and prototype for younger authors.

Retired Supreme Court Justice Anthony M. Kennedy, here in his capacity as a generational peer and a fellow Sacramento native, remembered Didion as a close friend of his older sister Nancy’s and a frequent dinner guest. She was a gifted and “pensive” girl, cerebral beyond her years, who would “think and write and think and write, all over again.” Former California Governor Jerry Brown, speaking via a taped video feed, also shared Sacramento memories and of Didion as a college friend of his sister’s.

“She and Joan would share a smoke together and talk about the novels they were reading,” he said. “Years later, my sister’s most vivid memory was of Joan coming down …read more

Man appointed by Gov. DeSantis to oversee election crimes and security has died of a heart attack