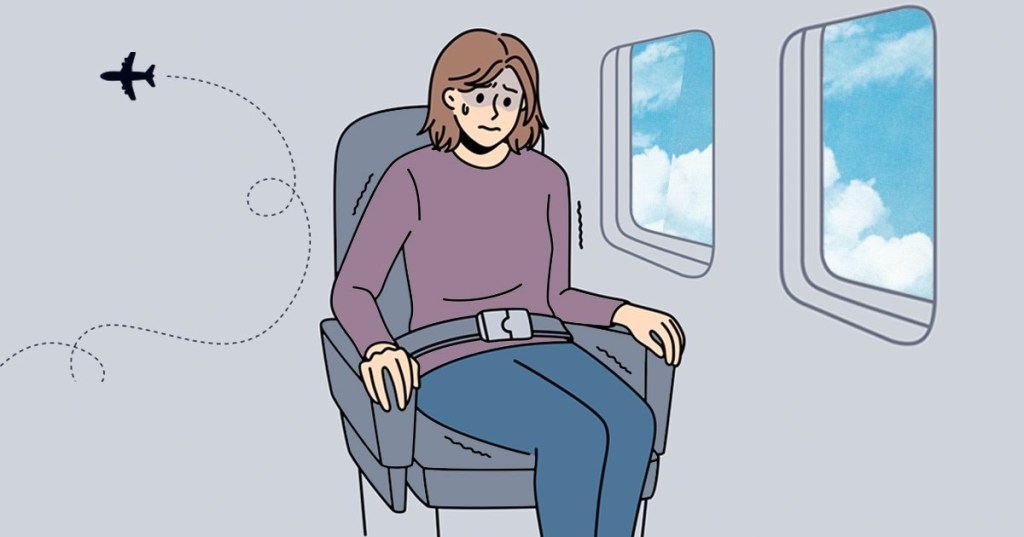 Fear of flying is called aerophobia or aviophobia (Picture: Metro.co.uk/Getty)

Flying can be unsettling.

There’s something inherently unnerving about moving through the sky 38,000 feet above the earth in a 127,000lbs metal box.

And having a fear of flying, otherwise known as aerophobia or aviophobia, is more common than you might think.

Between 33% and 40% of people experience some form of anxiety when it comes to flying, according to Stratos Jet Charters.

And a report from TIME found that 2.5% and 6.5% of the population have crippling anxiety, a genuine fear of flying, that is classified as a clinical phobia.

If you are scared of flying, I can almost guarantee that you’ve been told that ‘you’re more likely to die in a car accident than a plane crash’.

And while data shows that car travel is about 100 times deadlier than flying, knowing this fact is unlikely to stop the sweaty palms, dizziness, waves of nausea or the sinking feeling in the pit of your stomach when you edge nearer to take off.

Fear of flying could be linked to a fear of aeroplanes themselves or connected to psychological issues such as panic attacks, claustrophobia or post-traumatic stress disorder.

Some people may be scared to fly as they are not in control of what happens during the flight.

For others, the fear stems from external factors such as turbulence, bad weather or potential faults with the plane.

‘I’ve suffered from a fear of flying since I was little, although I have no specific memory of a difficult flight or traumatic experience that may have triggered this,’ says BWRT therapist and wellbeing coach from Warwick, Hannah Bailey.

‘The fear and panic around flying seemed to increase as I got older.

‘Even the process of booking a flight would turn my stomach over because I knew that I would have to endure the flight before I could enjoy my holiday.

‘Once I boarded the plane, I would be checking, and double checking my surroundings – did the pilots and crew look experienced and professional, were there any strange noises, did the plane look evenly balanced with passengers?

‘I would be hyper-vigilant and feel particularly distressed if I felt another passenger was loud, difficult or drunk in any way.’

Hannah tried many different techniques to help treat her fear of flying, but nothing seemed to work.

‘Once in the air, I would try to remain calm and relaxed using some different mindfulness techniques that I had learnt; however, these always required a lot of effort and weren’t always successful,’ she says.

‘If we encountered turbulence, then this is the part that would cause me the most stress and panic.

‘I would be in tears or having a panic attack, gripping the seats and unable to talk to anyone.’

Then two years ago, Hannah came across a type of psychotherapy called BrainWorking Recursive Therapy (BWRT), which offers the chance of …read more

This electric backpack will let you fly like Ironman

This selfie was taken just 20 minutes before godmother saved life of girl, 1