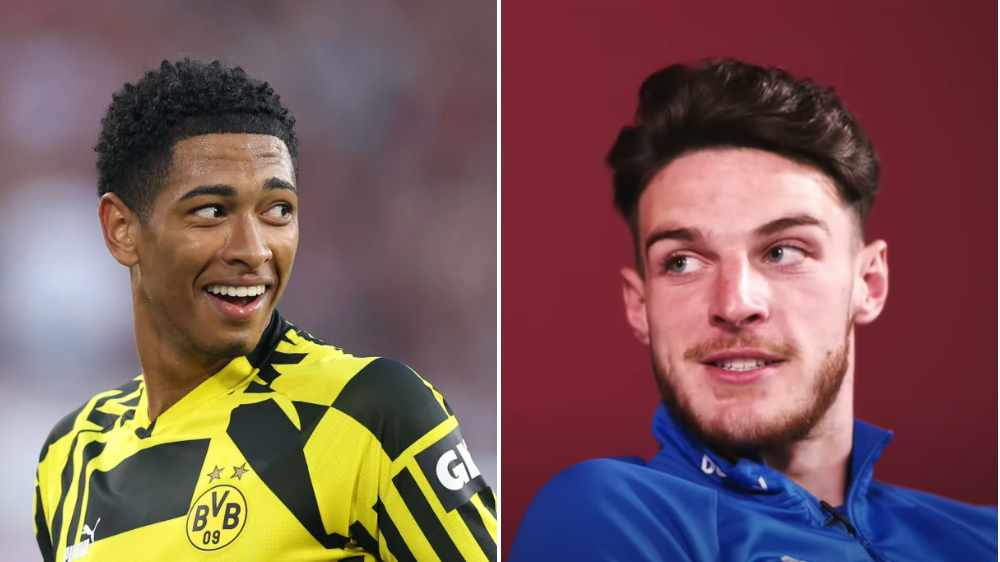 West Ham and England midfielder Declan Rice has heaped praise on Jude Bellingham as he continues to be linked with Liverpool, Manchester United and Chelsea.

Bellingham has established himself as one of the best young players in the world and a regular for England since joining Borussia Dortmund in 2020.

The 19-year-old has already made 16 Champions League appearances and represented his country 15 times, becoming the youngest player in Euros history when he featured at last summer’s tournament.

Bellingham’s form has attracted interest from Liverpool, Manchester United and Chelsea, with the Premier League giants hoping to secure his signature next summer.

It was reported earlier this week that Borussia Dortmund will demand a British transfer record fee in order to sanction Bellingham’s departure.

‘He’s got everything as a 19-year-old, you know, he’s a man, he has played on the big occasions already. He’s ready to play, but obviously it’s down to the manager to pick what he thinks is best.

Rice says he enjoys playing next to Bellingham and believes they would complement each other if they both started at the Qatar World Cup.

‘When I’ve played with Jude, I loved it,’ said Rice, who has also been linked with some of the biggest clubs in England.

‘Obviously it takes time to gel with a partner, you’re not going to get that connection straight away.

‘But over time you do and even with all the other midfielders in the squad, I hope that we can go on for the next 10 years and create a special, special bond in the middle of the pitch.

‘I hope everyone does well because that’s what you need. You need a squad and you need everyone to be at it and you need to be ready whenever you’re called upon.’

‘If I was playing next to Jude, obviously I already have done in a major tournament, I would say to him to just to go and express himself.

‘Go and do what he does best. Go and get on the ball and attack people, go and run at people.

‘If you lose the ball, don’t care, just go and enjoy it and I’ll be there to defend for you.

‘When you’ve got a player like that you need to give them the luxury of getting on the ball and expressing themselves and he’s got that in there.’

Both Bellingham and Rice were named in Gareth Southgate’s England squad and could feature in the upcoming matches against Italy and Germany.

The 10 most disappointing games on the PS4 – Reader’s Feature