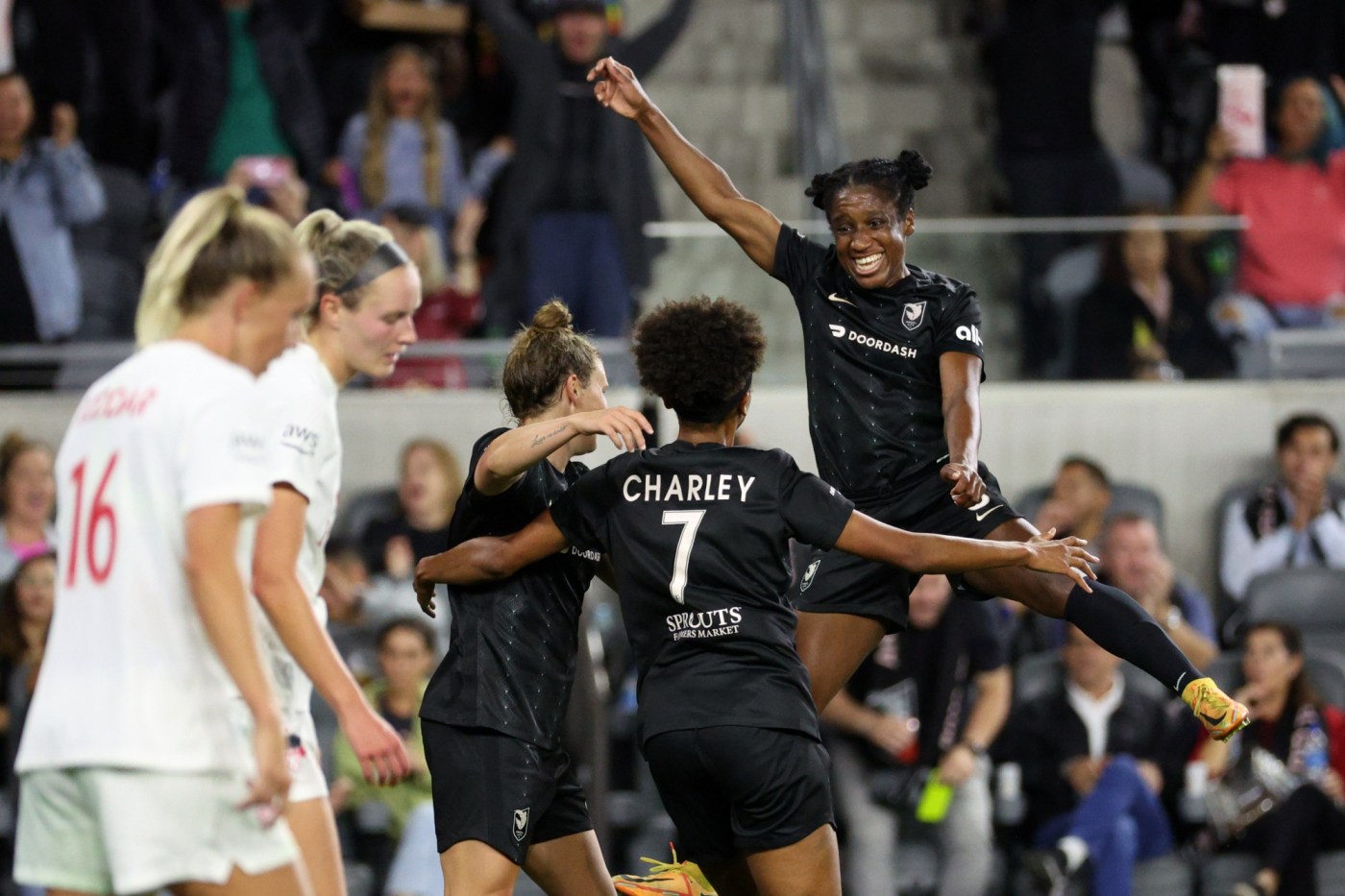 LOS ANGELES — The Angel City Football Club has a goal of making the NWSL playoffs in its first season.

With two games left in the regular season, that dream is still alive, thanks in large part to Wednesday night’s 2-1 victory over the Washington Spirit in front of 16,112 at Banc of California Stadium.

The win didn’t come without some stressful moments. In the 87th minute, Washington was given a penalty kick after Ashley Hatch was brought down in the penalty area. Hatch stepped up and buried the kick, then Angel City had to survive four minutes of stoppage time before finally getting to celebrate.

The win, which snapped a four-game winless streak, moves Angel City (8-7-5, 29 points) back into seventh place, one point behind the Chicago Red Stars (8-6-6, 30 points) for the sixth and final playoff spot in the 12-team league. Eighth-place North Carolina (8-8-4, 28 points) is lurking one point behind Angel City, which will face Chicago in a regular-season finale on Oct. 2 in Chicago.

Before that, Angel City has another important home game, Sunday evening against Racing Louisville FC (3-9-8, 17 points).

Claire Emslie opened the scoring in the 39th minute with a tap-in of a cross from Ali Riley, which somehow eluded two Washington Spirit defenders.

Six minutes into the second half, Simone Charley extended Angel City’s lead to 2-0 with a header on a cross from Jasmyne Spencer.

This was Angel City’s first league home game since Aug. 14. The club recently completed a stretch of three road games in seven days against Houston, North Carolina and San Diego that netted just one of nine possible points (a 1-1 draw with Houston.)

Wednesday’s two-goal night was the first for Angel City since its 3-1 win over Gotham FC on Aug. 28 and its first at home since July 30. Angel City actually lost that game, allowing OL Reign to score three goals in the second half for a 3-2 win.

That was not the case this time, thanks to goalkeeper DiDi Haračić, who made five saves to preserve the shutout.

Students Say They Were ‘Duped’ Into Attending Twisted Religious Event

The Viral 12-Foot Home Depot Skeleton is Sold Out, but These Halloween Decorations Have the Same Wow Factor