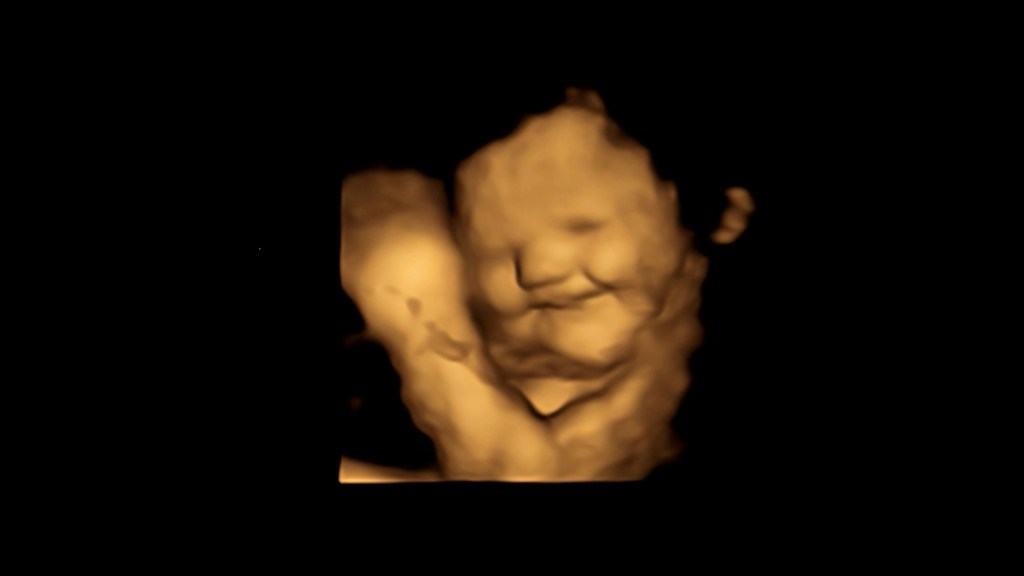 Eating carrots during pregnancy makes babies happy in the womb, according to a new British study.

Mums to be change the mood of their unborn infants by what they have for breakfast, lunch and dinner.

Scientists recorded the first direct evidence of unborn infants reacting differently to various smells and tastes by looking at their facial expressions.

An analysis of 4D ultrasound scans of 100 pregnant women showed how foetuses responded after being exposed to flavours from different foods.

While carrots caused developing foetuses to ‘laugh’, kale, seemed to have the opposite effect, bringing them to ‘tears’.

‘A number of studies have suggested babies can taste and smell in the womb, but they are based on post-birth outcomes while our study is the first to see these reactions prior to birth,’ said lead author Beyza Ustun, a PhD student at Durham University.

‘As a result, we think this repeated exposure to flavours before birth could help to establish food preferences post-birth, which could be important when thinking about messaging around healthy eating and the potential for avoiding “food-fussiness” when weaning,’

The international team studied how the foetuses behaved just a short time after ingestion by the mothers.

The findings published in the journal Psychological Science sheds fresh light on the development of human taste and smell receptors.

Humans experience flavour through a combination of taste and smell. In foetuses, this may happen through inhaling and swallowing the amniotic fluid that surrounds it.

What pregnant women eat might also influence babies’ preferences after birth and help establish an appetite for fruits and vegetables.

The international team studied how the foetuses behaved just a short time after ingestion by the mothers (Credits: Durham University / SWNS)

‘Previous research conducted in my lab has suggested 4D ultrasound scans are a way of monitoring foetal reactions to understand how they respond to maternal health behaviours such as smoking, and their mental health including stress, depression and anxiety,’ said the study’s co-author Professor Nadja Reissland.

‘This latest study could have important implications for understanding the earliest evidence for foetal abilities to sense and discriminate different flavours and smells from the foods ingested by their mothers,’

The mothers, aged 18 to 40, were scanned after 32 and 36 weeks of pregnancy. They were given a single capsule containing about 400mg of carrot or kale powder around 20 minutes before the scan.

It was the only thing they consumed for at least an hour. The women also did not eat or drink anything else containing carrot or kale that day.

Facial reactions of the foetuses showed that exposure to just a small amount of carrot or kale was enough to stimulate a reaction, compared with foetuses not exposed to either.

Mums to be change the mood of …read more

Mel C didn’t warn Robbie Williams before opening up about their romance in new book: ‘Sod him!’

Emmerdale spoilers: Kerry executes a plot to get rid of Noah forever

Strictly Come Dancing: When is the first elimination of the series?