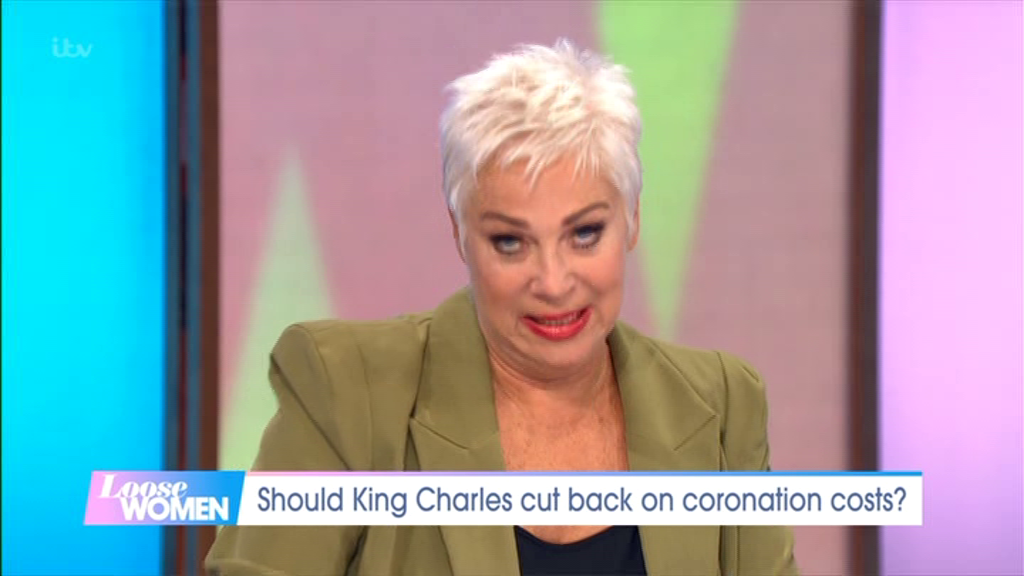 Denise made a direct plea to the King about his coronation (Picture: ITV)

Denise Welch has issued a ‘request’ to King Charles III regarding his upcoming coronation, expressing her hope that it will only be for one day after the 10-day mourning period for the Queen.

Following the death of Queen Elizabeth II at the age of 96, her eldest son has succeeded her on the throne.

His coronation is not expected to take place until next year, with some speculating that it could even take place on the same day that his mother was crowned, on June 2.

On Wednesday’s edition of Loose Women, the panel discussed whether the coronation could be scaled back, especially considering the ongoing energy crisis affecting members of the public across the nation.

After Linda Robson expressed her opinion that there should be big local celebrations at street parties, Denise agreed that it will ‘definitely be a celebration’.

‘I agree, I think that it’s all been quite a lot these last 10 days, but I think it definitely will be a celebration,’ she said.

The eyes of the world were on King Charles III during the Queen’s funeral (Picture: Hannah McKay/WPA Pool/Getty Images)
The Queen’s coronation took place over a year after she was crowned (Picture: Samir Hussein/WireImage)

‘But I think that Charles, hopefully, as the new King, will read the room and realise that although the money spent on this type of pageantry and pomp obviously brings a lot of revenue into this country, I think that it should be a slightly scaled back affair, celebrated more with the street party.’

She then added her personal plea, stating: ‘And also please, can I put in a request to King Charles – that it’s just for one day, because I found that a lot, 10 days of a media blackout and everything.’

After the news of the Queen’s death was announced, several TV shows were cancelled or postponed to make way for live coverage in the lead-up to the funeral proceedings.

Huw was highly commended by his BBC coverage of the Queen’s funeral (Picture: BBC News)

Despite the BBC and broadcaster Huw Edwards receiving scores of praise for the way in which Her Majesty’s death was reported, there were some complaints from individuals who criticised the ‘level’ of content focused on the developments.

Queen’s name ‘etched for eternity’ on final resting place
Queen Elizabeth II’s funeral: All the key events as they happened
Queen’s funeral watched by more than 29,000,000 TV viewers in the UK
Where has Queen Elizabeth II been buried and can you visit her tomb?
All the tributes the Royal Family have paid to the Queen following her death

The BBC received 670 complaints regarding its coverage, a fraction of the 110,000 complaints that it received for …read more

How enviable is your kitchen? The most desirable features have been revealed