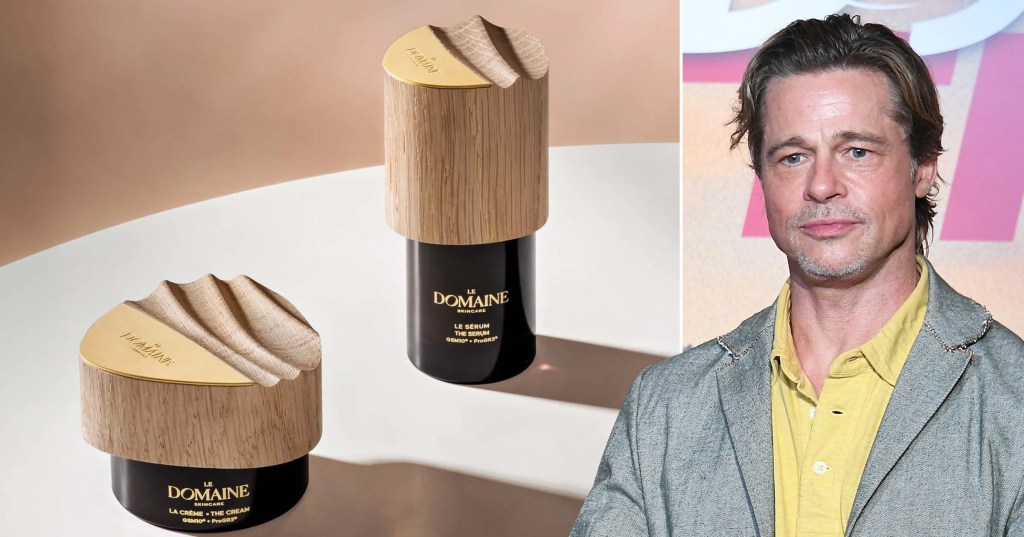 Not quite content with ruling Hollywood for the last few decades, Brad Pitt has now turned his attention to the skincare market.

In fact, the Bullet Train actor has launched Le Domaine, a genderless skincare line made up of four products.

Honestly, is there nothing he can’t do.

The dad-of-six developed the new brand at Chateau Miraval, which he shared with ex-wife Angelina Jolie, and unveiled his collection today, in very stylish dark jars with gold logos and wooden lids.

Included in Le Domaine are a cleansing emulsion, a serum, a cream and an upcoming fluid cream, which will be available in January – prices range from $70 to $385, with refills also available.

There is no denying that skincare is a highly saturated market – Kim Kardashian, Rihanna, Hailey Baldwin, Selena Gomez, Alicia Keys, Jessica Alba and Millie Bobby Brown among the many, many famous faces who have launched their own brands.

Brad spoke of his latest business venture, which was developed at Chateau Miraval (Picture: WireImage)

However, Brad isn’t fazed by the competition in the slightest.

‘I know there are new products nearly every day that people are trying to launch, but if I hadn’t seen a real difference visually in my skin, we wouldn’t have bothered,’ he said of the products

‘Truthfully we wouldn’t have done it unless we felt there was something valid here, something original, something that worked. I get sent stuff all the time and… ugh. It’s just all the same for me. But this last year we have been testing Le Domaine and I was really surprised by the results, and that for me, made it worth going forward.’

Brad has been sure to make Le Domaine as inclusive as possible, insisting the products are for everyone.

Speaking to Vogue about the four-product line, he explained that he has learned a lot from the women in his life in the past, and tried to incorporate this in his

‘I mean, I probably got more from my female partners in the past. We kept the smell very neutral, very fresh, and very, very subtle,’ he told the publication. ‘I mean, I’m the kind of person who will change hotel rooms if I can smell the cologne of the last person who stayed there! It’s too much! It’s too strong! Keep it subtle. Let people come to you. Don’t force it on others. That’s my feeling. For smells, I mean. I stand by that for smells!’

Brad credited Gwyneth Paltrow for inspiring him with her Goop line (Picture: WireImage)

Brad also credited former partner Gwyneth Paltrow – who commands her own lifestyle and beauty empire, Goop – with encouraging him to branch out in his career.

And, apparently, introducing him to the benefits of washing his face.

Chelsea made a mistake over Conor Gallagher, according to Glen Johnson