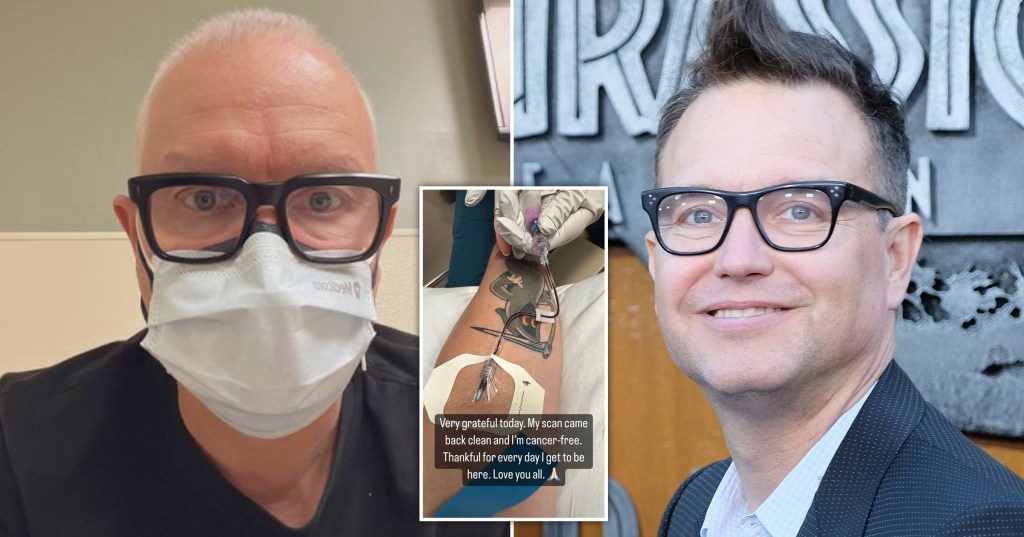 The star has given fans an update from his latest hospital scan (Pictures: Instagram / @markhoppus)

Blink-182’s Mark Hoppus has given fans an update from his latest hospital scan, joyfully revealing that he is still cancer-free.

The pop-punk icon, 50, announced he had been diagnosed with stage four lymphoma in June 2021 and has been battling the disease privately, but admitted that he was ‘scared’.

A few months later, in September of that year, the musician went on to reveal that he had been given the all-clear and was cancer free.

And now he has given fans a further update on his health from his latest scan.

Posting on Instagram, he said: ‘Very grateful today. My scan came back clear and I’m cancer-free.

‘Thankful for every day I get to be here. Love you all.’

The star has kept fans updated on his journey (Picture: Mark Hoppus / Twitter)
The star has announced he remains cancer-free (Picture: Instagram / @markhoppus)

Originally announcing his cancer-free status to his one million Instagram followers a year ago, he said his oncologist had given him the good news, and thanked God, the universe, his friends, and family for their support, kindness, and love.

‘Still have to get scanned every six months and it’ll take me until the end of the year to get back to normal but today is an amazing day and I feel so blessed,’ he added.

Since publically announcing his diagnosis, Mark – who formed the band Blink-182 in 1992 alongside guitarist Tom Delonge and drummer Travis Barker – has documented his chemotherapy treatment.

The star has since returned to performing since being given the all-clear (Picture: Ella Hovsepian / Getty Images)

‘Everything about chemo sucks except the part where it hopefully saves my life,’ he tweeted.

He also asked fellow cancer patients whether they could still ‘smell the chemo’ weeks after treatment.

‘Sometimes when the effects of the chemo are strong and the steroids are overwhelming, and my heart races, I feel like I can HEAR the valves in my veins opening and slamming shut with each heartbeat,’ he added.