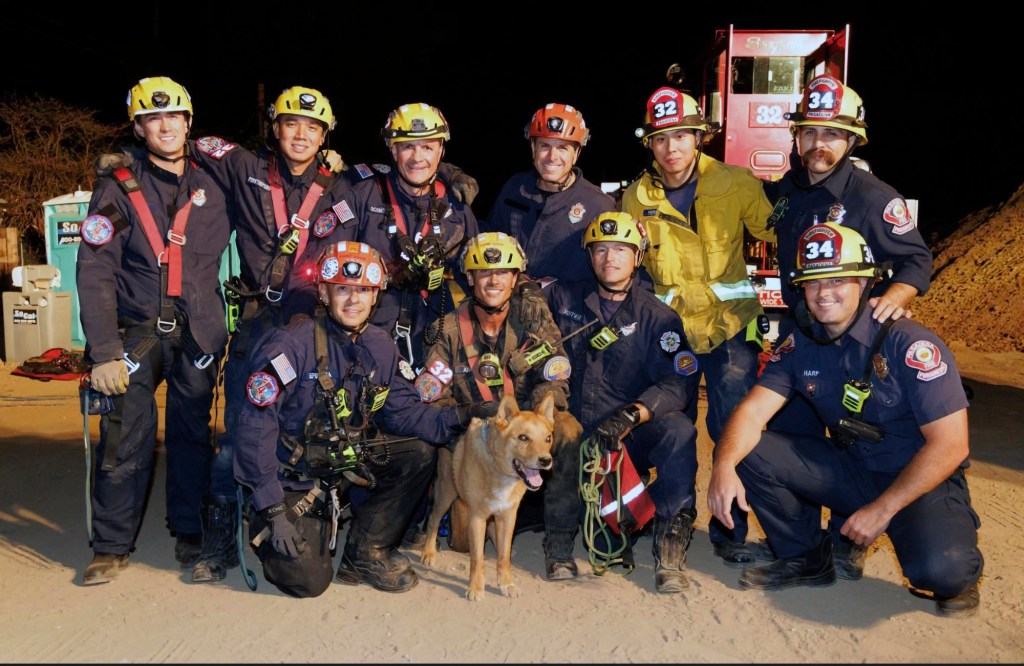 This image provided by the Pasadena Fire Department showing firefighters pose with a Cesar a blind dog that was rescued from a hole (Picture: AP)

A 13-year-old blind dog named Cesar had to be rescued by firefighters Tuesday after he fell into a deep hole at a construction site next to his California home.

Cesar lives next door to the construction site in Pasadena, California, along with his owner, Mary, KABC-TV reported.

The curious dog apparently wandered onto the construction site around 7pm Tuesday night when he fell into a hole that was about 15-foot (4.5 meters) deep and 3 feet (0.91 meters) wide.

Cesar’s barks helped his owner realize he was no longer in her backyard (Picture: AP)

Mary’s other dog began to frantically bark, and when Cesar began to bark in response, Mary could tell he was no longer in her own backyard. She then called authorities, who sent over a search and rescue team to the construction site.

Pasadena Fire Chief Chad Augustin told the outlet there are plenty of unique challenges that come along with such a search mission, such as tight spaces.

‘The dog was blind,’ Augustin said. ‘This is a construction zone. Confined space rescues are low-frequency, high-risk. There’s a lot of steps we need to do to make it as safe as possible. For not just the dog, but also our rescuers.’

The rescue team used a series of ropes and pulleys to lower a team member into the hole. It took about 12 minutes for the rescuer to reach Cesar, secure him in a harness and bring him back up to the surface.

Cesar appeared to be unharmed after he was pulled out of the hole (Picture:AP)

Firefighters on the scene said Cesar appeared to be frightened while stuck in the hole. Meanwhile, above ground, his owner shed some tears as she was concerned for her beloved pet.

Cesar appeared to be healthy and uninjured after he was brought out of the hole, and shook off a ton of dirt and dust he picked up while wandering through the construction site.

The responders on the scene were grateful Cesar had a safe return home.

‘At the end of the day, all of us are pet lovers,’ Augustin said. ‘I have a dog of my own. We want to make sure we take care of not just our residents, but also our furry friends.’