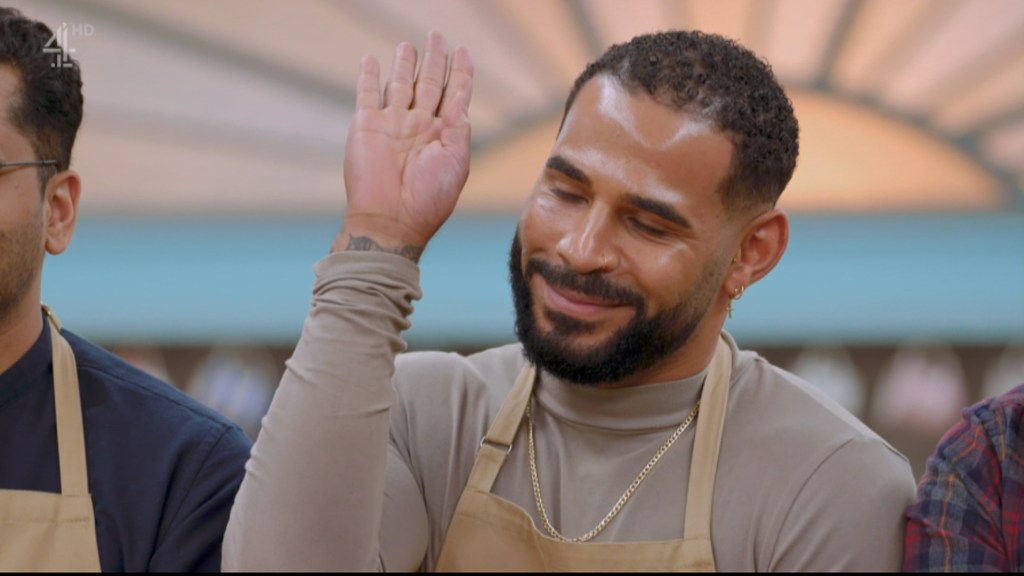 Sandro’s causing quite a stir with viewers after his first appearance in the tent (Pictures: Channel 4)

Great British Bake Off is back on our screens for its 2022 series and already fans around the country are picking their favourite contestants.

After showing off their best cake recipes in the first week, the 12 new faces to the famous tent had their work assessed by Paul Hollywood and Prue Leith.

The Star Baker Award was given to Janusz after his ‘Home is Where the Flowers Grow’ bake wowed the judges. Will was, sadly, eliminated.

Although he didn’t win Star Baker, Sandro definitely caught the attentions and sympathies of the viewers at home.

His ‘Bitesize of Love’ cake got positive comments from the judges, and he placed 2nd in the technical challenge.

But in living rooms around the country, it isn’t necessarily Sandro’s baking skills that have won him the affections of those tuning in.

In case you couldn’t tell by now, Sandro has definitely had more than a few viewers feeling incredibly charmed.

On social media, one fan said: ‘Looking forward to Sandro being the highlight of my week for the next couple of months.’

Another viewer said: ‘He’s been on my screen for five seconds and I’ve already fell in love with Sandro.’

How old is Sandro?

Sandro has been baking for nine years, but how old is he? (Picture: Channel 4)

According to the official Great British Bake Off website, Sandro is currently 30 years of age. He started baking when he was 21 after his dad sadly died.

What is Sandro’s job?

Who is Sandro, bottom row in the middle, away from the tent? (Picture: @BritishBakeOff/Twitter)

In his spare time, Sandro is said to enjoy boxing, ballet, and breakdancing, but his profession takes him (briefly) away from the dancefloor, the ring, and the kitchen.

By day, Sandro is a nanny. According to fans on social media, however, he often incorporates baking into his regular job, hosting online baking classes for children with autism.

Rumours have spread like wildfire during the week that baking has been a job for Sandro in the past, after he was linked with a few famous faces.

In 2017, Sandro is said to have sold a birthday cake to TV presenter Maya Jama for her then-boyfriend Stormzy’s birthday.

However, in a statement sent to Metro.co.uk, the programme emphasised that Sandro meets the criteria to compete, despite appearing to have sold some cakes in the past.

‘There are strict criteria to take part in the show and Sandro meets that criteria. His livelihood does not derive from commercial baking or cooking in a professional environment,’ they said.

Where is Sandro from?

Sandro and his mum moved to the UK (Picture: Channel 4)

Sandro was born in Angola in the early 1990s, but fled Angola with his mum when he was just two years old.

The country was enduring a civil war that began in 1975 and lasted, with some interruptions, until …read more