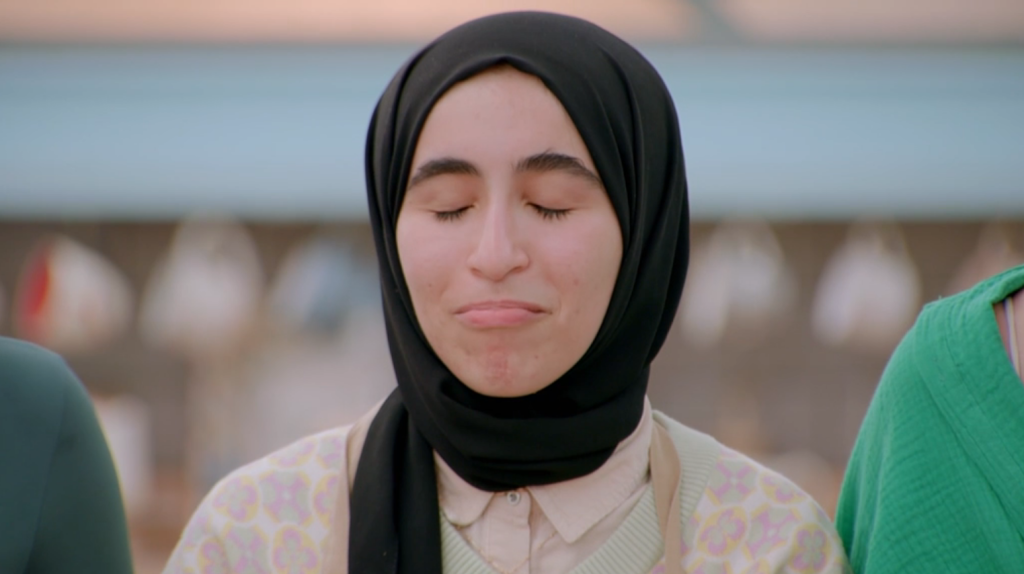 The teenager was gutted (Picture: Channel 4)

Maisam was the second contestant to be axed from The Great British Bake Off on Tuesday, following a few fumbles with timing during a closely fought week.

After Will was booted in week one for overbaking, the youngest baker in this series, at just 18, Maisam struggled to get her bakes completed to the standard she hoped for.

Her ‘cute carrot’ macrons lacked piping detail as she rushed to complete them in the alloted time, while her showstopper bake was also criticised for not being as detailed as it could.

Paul gave out two handshakes during the first signature challenge, which was to produce 18 identical macrons presented to look like something else, with Dawn and Maxy’s bakes impressing most and earning them each the first handshakes of the series.

The second challenge was for the contestants to produce Garibaldi biscuits and proved a difficult task for many.

Someone had to come last, and unfortunately it was Abdul, who Pru bluntly told his biscuits ‘looked a mess’.

Her elimination came as a bit of a shock (Picture: Channel 4)

The top three spots were taken by Sandro, who impressed but used too much chocolate, James in second and a shocked Rebs first with her ‘perfect’ example.

The showstopper gave a lot of issues to the bakers, with Rebs in trouble with her biscuit mask, having to start from scratch, while Carole had a big issue after her mask snapped with just minutes to go.

The Great British Bake Off returns next Tuesday at 8pm on Channel 4 and is available to watch on All 4.

MORE : Graham Norton defends having JK Rowling on his radio show: ‘We should talk to people we disagree with’

Blackhawks’ Jake McCabe on faster track toward return than realized