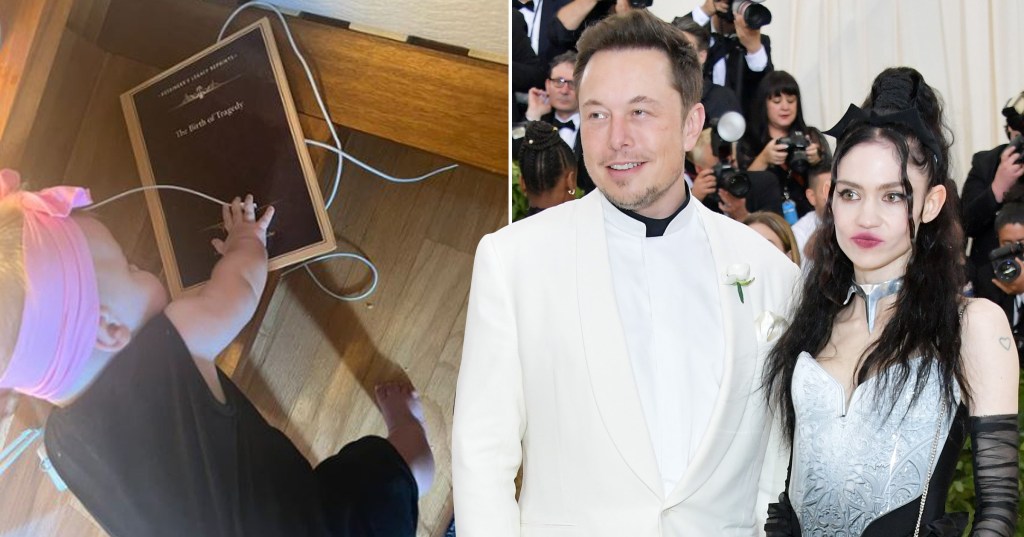 Exa was born at the end of last year (Picture: Twitter/Grimezsz/Getty)

The little tot, who was secretly born in December to a surrogate, looked super sweet in a black onesie and pink headband with bow.

Her 34-year-old mum, who was showing her daughter listening to music and playing with a copy of heavyweight philosophy book The Birth of Tragedy, wote in the caption: ‘My daughter is dancing to techno over this copy of the birth of tragedy by nietzsche – what a queen.’

In a follow-up tweet sent on Sunday she added: ‘She loves Boris Brejcha omg she’s so hardcore haha.’

The mother-of-two also shares two-year-old son X Æ A-12 with SpaceX founder Elon, with whom she is in a murkily defined friendship/relationship, following various identifiers as soulmate and semi-former girlfriend (after their semi-separation in 2021).

The Oblivion singer revealed their family had grown in a chat with Vanity Fair, explaining that the little one was born in December, via a surrogate, three months after she split from the Tesla mogul, 50.

My daughter is dancing to techno over this copy of the birth of tragedy by nietzsche – what a queen pic.twitter.com/GajRCEVDen

Grimes and Elon started dating in 2018 before splitting, we think, in 2021 (Picture: Angela Weiss/AFP)

Grimes – real name Claire Elise Boucher – touched on why she decided to keep Exa’s arrival under wraps initially, admitting: ‘I don’t know. I don’t know what I was thinking.’

Lifting the lid on their (sort of) reunion, she insisted that their romance is the ‘best it’s ever been’, as they ‘just needed to be free’.

‘I would probably refer to him as my boyfriend, but we’re very fluid. We live in separate houses. We’re best friends. We see each other all the time…. We just have our own thing going on, and I don’t expect other people to understand it,’ she said.

On whether we can expect anymore bundles of joy in the future, the musician added that they have ‘always wanted at least three or four’.

The singer and musician has said she would like more kids in the future (Picture: Getty)

Elon spoke of their romance in a chat with Time Magazine in December, admitting it was unlikely that they would reunite as a full-time couple.

‘Grimes and I are, I’d say, probably semi-separated,’ he explained.

‘We weren’t seeing each other that much, and I think this is to some degree a long-term thing, because what she needs to do is mostly in LA or touring, and my work is mostly in remote locations like this,’ he said, speaking of his Space X headquarters in Texas.

Stock Market: Suez Canal Update! Floating!
I ditched the 9-5 and it’s been amazing for my wellbeing and productivity

‘The bomb switch is here’: We got behind the controls of a runaway Vulcan jet

Your daily horoscope for Sunday, September 25, 2022