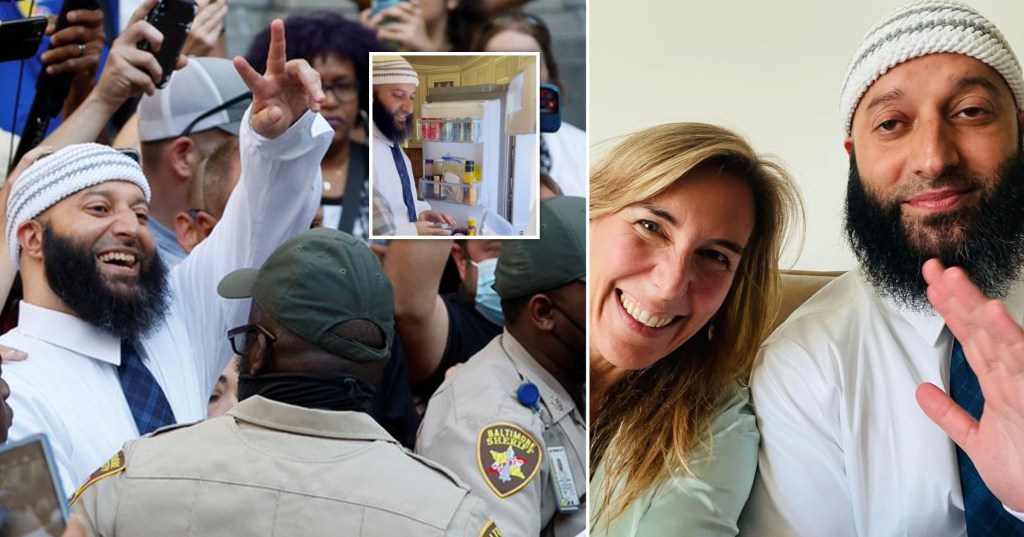 Adnan Syed was seen raiding a fridge after his hearing on Monday while still wearing his clothing from court.

In a video posted by family friend and attorney Rabia Chaudry on Twitter, Syed can be seen excitedly feasting on leftovers after he arrived from his hearing at Baltimore City Circuit Courthouse.

Syed excitedly grabs for a plastic container of samosas, before someone stops home.

‘No, we got fresh samosas coming though!’ they say excitedly off-screen.

Syed then pulls out another container and asks ‘what are these?’

‘Those are dumplings we got yesterday,’ another friend answers, while Syed takes a bite of a still-cold dumpling.

‘Leftovers at home never tasted so good!!’ Chaudry said after posting the video.

Syed, whose conviction for murder was vacated at a hearing on Monday, will spend another month on house arrest and will be monitored by GPS.

Circuit Court Judge Melissa Phinn gave prosecutors another 30 days to give Syed another trial, or his case will be thrown out.

Chaudry hosts a podcast, Undisclosed, which investigates wrongful convictions and analyzes the US criminal justice system.

Undisclosed’s first season in 2015 focused on the case of her childhood friend, Adnan Syed.

Adnan Syed poses for a selfie with his mother (left) and his childhood friend Rabia Chaudry (right) (Picture: Twitter)

She also worked as a producer for the HBO documentary ‘The Case Against Adnan Syed.’

‘Salamu alaykum brother,’ someone says while Syed walks down the suburban street with his mother.

Chaudry was not the only person close to Syed documenting the day. Amy Berg, the director of ‘The Case Against Adnan Syed,’ took a selfie with a smiling Syed at the courthouse.

This is Amy Berg/ @disarmingfilms – the director of both The Case against Adnan Syed and West of Memphis.
She is saving lives.
Thank you. pic.twitter.com/qVLlRvFypO

‘What a privilege to be able to see these two stories through to their respective happy endings. Justice can happen!’ Berg said on Twitter.

Erika Suter, Syed’s attorney who represented him at his hearing, excitedly addressed the media after the hearing: ‘Today, my friend and client Adnan Syed walks free for the first time in 23 years.’

Suter later posted another photo of herself with Syed and his mother at his home. ‘Welcome home, Adnan,’ she said on Twitter.

When somebody called her a hero, she responded with …read more

Which of The Queen’s great-grandchildren went to Her Majesty’s funeral?