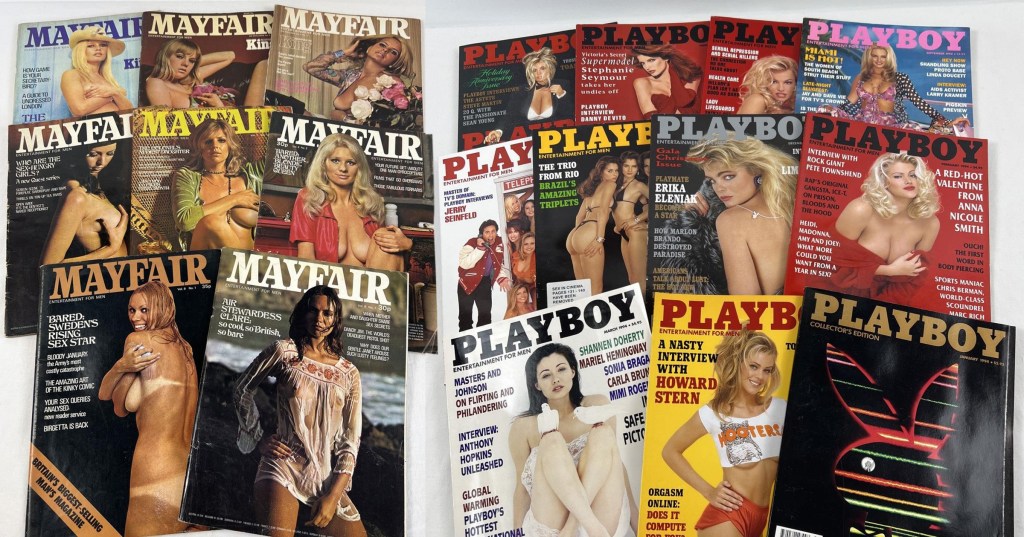 The retro hoard has come on the market from a former sex shop owner who spent decades amassing thousands of prized, and they’re so immaculate, there’s not a single sticky page.

Among the titles are Playboy, Penthouse and Mayfair – which have featured shoots with pin-ups from Bo Derek and Kim Basinger to Melinda Messenger.

He’s unloading his top shelf backlog in the hope it will help fund his retirement to Spain.

Catherine Wilford, of Beeston Auctions in Norfolk, marvelled at the size of the connoisseur’s hoard, delivered in a Land Rover bulging with boxes.

She said: ‘We have done several sales of classic adult material but this is by far the largest collection I have ever come across.

‘We have stacks and stacks of boxes here which we are sorting through. There must be at least 3,000 magazines.

‘This sale is only a fraction of it. We are yet to see his ‘mint’ editions and there are a lot of boxes still to open.’

The auctioneer added about breaking a sweat categorising the collection into different eras and fetishes: ‘He’s made two trips and he is posting eight to 10 boxes at a time. We’re just taking each box as it comes – it’s quite a momentous task.

The winning bidder will own a Who’s Who of pin-ups (Picture: BeestonAuctions/BNPS)

‘There are some buyers who only want magazines relating to a particular fetish and others who want specific magazines from a certain era.

‘The owner is retiring and moving to Spain so he can’t take them with him. He has sold magazines online and in a shop and this is the stock he has left.’

The seller’s titles range from the 1960s through to the 1980s and include extremely rare editions of Playboy.

Other top-shelf titles from the ’80s on offer include Men Only, Razzle, Fiesta, Parade, Escort and Rustler.

The seller also has the earliest known nude magazines in Britain – Health and Efficiency – printed for the naturist community in the early 20th century.

Auctioneers have so far spent hours grouping the magazines into a ‘cornucopia’ of different fetishes, which include naked women wrestling in mud.

They predict frantic bidders will splurge ‘thousands of pounds’ to get their hands on the stash when it goes under the hammer on August 15.

Man killed in Loop parking lot, another on Red Line train among 26 shot to start weekend in Chicago