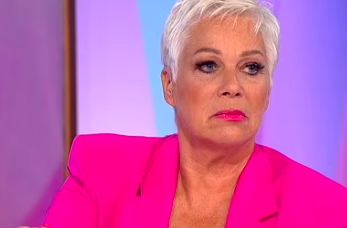 Denise Welch clapped back at critics who complain well-paid stars shouldn’t address the cost of living crisis during Friday’s Loose Women – although her speech was cut short.

The former Coronation Street actor was discussing the inevitable financial crash when she was cut off by the ringing on Friday’s episode.

The Geordie star was keen to speak her mind, saying she was ‘sick’ of complaints that celebrities don’t have the right to voice their opinion because they’re wealthy.

As panelists Kaye Adams, Sunetra Sarker and Carol McGiffin discussed the impending doom of the recession, the 64-year-old opened up about her financial situation.

The ex-Hollyoaks performer was expressing her gratitude that she has enough money to pay sky high energy bills and comfortably survive, as well as her son The 1975 star Matt Healy.

The TV personality also expressed concern that other loved ones were struggling to cope with eye-watering household costs.

But Denise abruptly stopped haldway through her point when an alarm sounded – and looked taken aback.

Attempting to soothe over the situation, Kaye, 59, told the audience: ‘I think there’s an alarm going off outside but we’ll get that checked out.’

Fortunately, the noise only lasted for a few seconds, but Denise sure looked confused.

Friday’s instalment of the ITV talk show was quite eventful, and not just because of the errant alarm.

Scottish presenter Kaye revealed she would be brushing off her dancing shoes and joining Strictly Come Dancing.

It had been rumoured the former The Wright Stuff panelist would be joining the flagship BBC show.

Kaye confirmed she would be joining Strictly live on air (Picture: REX/PA)More: Trending

Frenkie de Jong wants to join Chelsea – I know that for a fact, says ex-Tottenham boss

Kaye will be learning to tango and foxtrot along with previously announced contestants Will Mellor, Kym Marsh and Richie Anderson.

They will be pairing off with pro dancers and hoping to score a perfect 10 from judges Shirley Ballas, Craig Revel Horwood, Motsi Mabuse and Anton Du Beke.

MORE : Loose Women to finally welcome back studio audience for the first time in over two years due to pandemic

Espresso — what it is, and how to make it at home