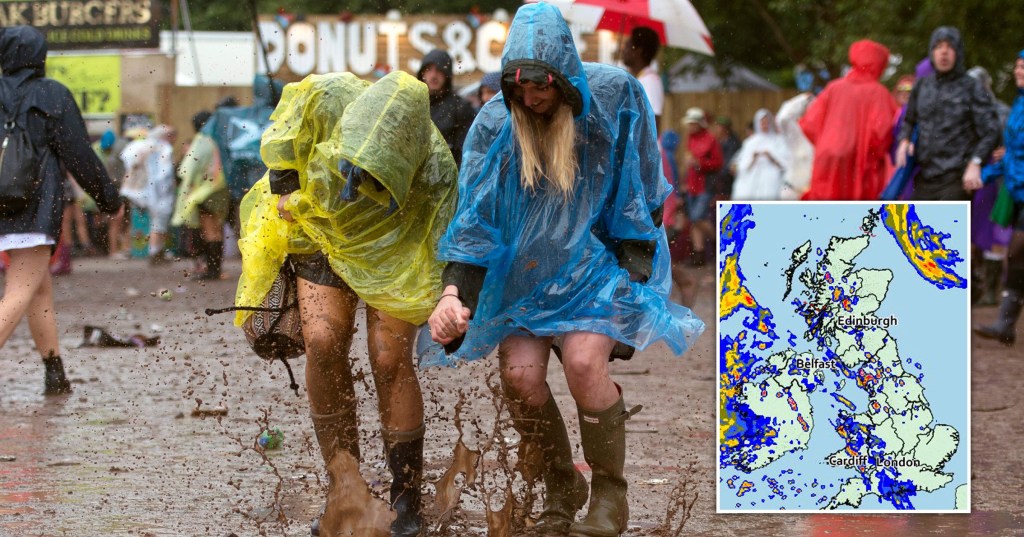 Music fans have been told to expect a wet weekend at Glastonbury – with thunderstorms and heavy showers forecast.

The Met Office is predicting rain will hit the festival mid to late afternoon today before easing off into the evening.

However, despite the respite from rain overnight, there is a risk of heavy downpours on Saturday and some showers on Sunday afternoon.

‘Showers will ease into Friday night and the band of rain will continue north-eastwards bringing some heavy bursts of rain at times.’

There will also be some moderate showers across central and southern parts of England into the afternoon with some sunny spells, especially across Scotland and eastern England.

On Saturday, the band of rain will weaken but showers will break out to the west and south west.

Ms Ayers said some ‘could be locally heavy with a risk of local thunderstorms, especially in the south west, therefore risk of some heavy showers for Glastonbury.’

Met Office meteorologist Alex Deakon added: ‘It’s going to be a rather messy one with some places having plenty of very warm sunshine but others again likely to see some showers initially most likely over Wales and south west England.’

Northern Ireland and parts of western Scotland could see some longer spells of rain, with heavy bursts, while the north and west could experience strong winds with a risk of coastal gales.

For Sunday, Ms Ayres said: ‘Cloudy with outbreaks of rain in the northwest, this becoming more showery later on.

‘Elsewhere a mixture of sunny spells and scattered showers, some showers for Glastonbury into the afternoon, these heaviest in the south west.’

Some showers could also impact British Summertime in Hyde Park on Friday, Saturday, and Sunday – although the Met Office said these are ‘light’ and ‘low risk’.

Temperatures are expected to remain warm, sitting in the low 20s through the weekend for the whole of the UK.

Strong winds continue in the north and west with a risk of coastal gales, mainly Northern Ireland, Wales and western Scotland, while it will be breezy elsewhere.