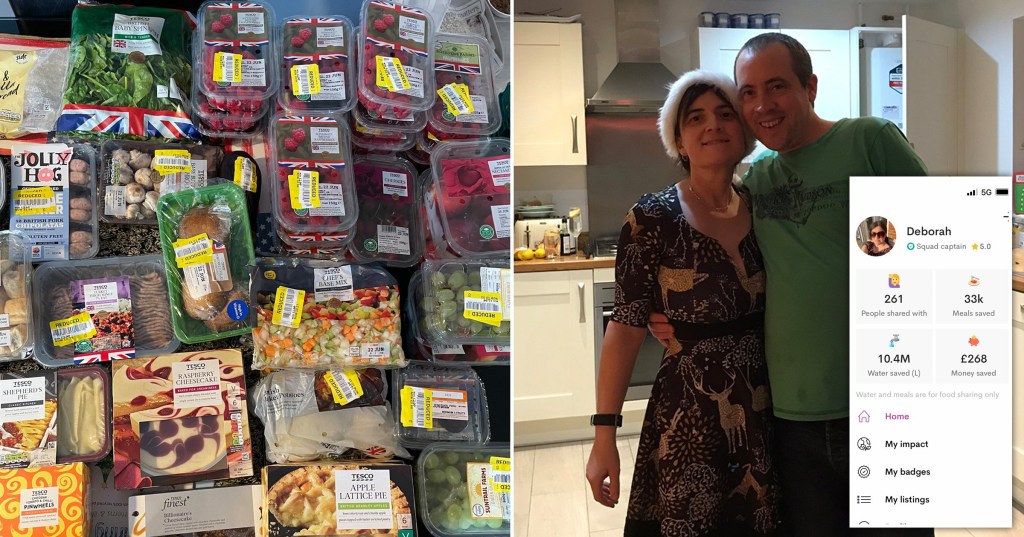 A primary school teacher from Middlesbrough, Tyne and Wear, has been dubbed the Whoopsie Queen after saving 60,000 items of food from being thrown away.

Over the past 19 months, mum-of-four Deborah Doloughan, 41, has saved thousands of pounds worth of food from being binned before distributing them to people for free.

While studying primary school teaching at university in 1999, Deborah worked as a cook at a fast-food restaurant.

During her time, she grew disgusted by the amount of food being thrown away, and she has become passionate about fighting needless waste ever since.

Deborah spent the following two decades as a yellow-sticker shopper.

During lockdown in November 2020, she came across an app called OLIO, which helps to distribute surplus supermarket produce destined for the bin to people for free – and decided to train to become one of their ‘food waste heroes’.

The mum of four has been dubbed the Whoopsie Queen by her friends (Picture: PA real life)

Now, with the help of husband James Doloughan, 43, and children, Millie, 11, Jacob, 10, Luke, seven, and Isaiah, one, Deborah, collects food and hands it out, saying: ‘This app was made for me!

‘I became so passionate about food waste and shopping in the reduced section that my friends started calling me the Whoopsie Queen.

‘Now I feel like joining the Olio app and making sure as much food doesn’t go to waste has been my calling.’

As well as working full-time as a primary school teacher, Deborah now spends five nights a week collecting surplus food from her local supermarket before taking pictures of it and listing it on the app – waiting for people to come by and pick it up.

With food prices soaring, in the face of the cost of living crisis and the highest inflation in 40 years, Deborah says more people than ever have dropped by her home to collect free goods.

‘I have noticed a massive influx of new people, as I know the regulars and their names,’ she noted.

‘But with the food price crisis, more and more people are relying on services like this.

‘I have seen so many people who rely on free food.

‘One Friday I didn’t collect any as I was at a party and a woman came to me the next week and asked me why I wasn’t there.

‘That was going to be her family’s food for the next few days.’

Across the five nights, Deborah will head to her local supermarket at 8.30pm.

Then she goes home with the food she collects and gets it photographed and listed on the app, ready …read more

Anna Kendrick and Bill Hader ‘split after year of dating’