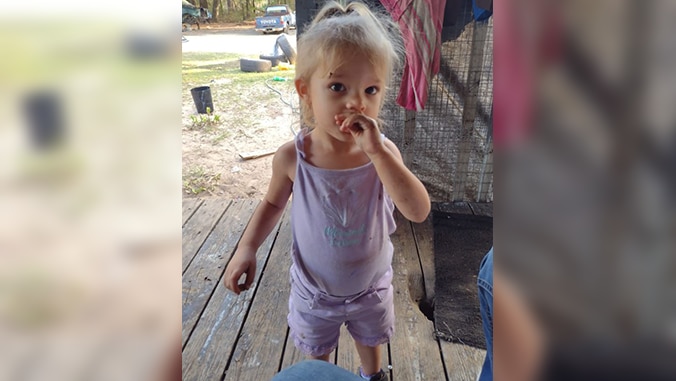 Family members on Thursday shared photos and memories of a 2-year-old girl who drowned in a Putnam County pond.

They identified the young girl as Jasmine Hurst.

Investigators said that the child’s mother told the Putnam County Sheriff’s Office on Tuesday that the child was playing outside a home they were staying at in Hollister when she vanished. The child was located face down in a nearby pond.

Anna Hurst, the mother, said she’s heartbroken and that it still doesn’t feel real that her daughter is gone.

Hurst said Jasmine, affectionately known as “Jazzy,” loved animals, singing — and she was excited to learn how to play guitar. She enjoyed the Disney movie “Frozen,” and her mother recently purchased her a special guitar.

“A six-string acoustic guitar, and she was gonna get lessons from my brother,” Hurst said. “I was hoping my brother could teach her.”

Dreams that were tragically cut short.

Hurst said the family was outside the home that they’d been staying at for just two days when Jasmine and a 4-year-old friend wandered off.

“I looked away for a second and she was gone,” Hurst said. “I tried everything I could to bring her back.”

Jasmine was rushed to a hospital for treatment, but she didn’t make it.

“She was my girl. I always wanted her. I had seven boys. I dreamt of her my whole life,” Hurst said.

Through her pain, Hurst wants to prevent other parents from going through a tragedy like this.

“Kids move so fast,” she advised. “And don’t ever forget, if you’re away just for a second, how fast they go.”

A look at 50 years of Supreme Court abortion decisions

With Roe v. Wade overturned, here are the states set to ban abortion