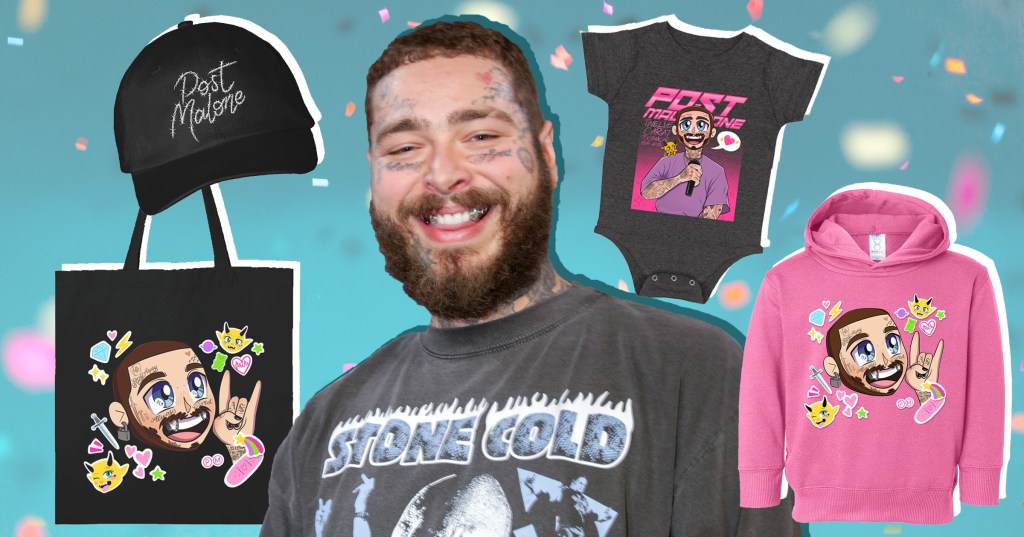 Post Malone has revealed that he has designed a line of children’s clothing inspired by becoming a father for the first time.

The nine-time Grammy nominee, 26, recently revealed he had had a baby daughter in the most low-key fashion, and got engaged to his mystery fiancée.

The news of his daughter’s birth came shortly after it was revealed he was going to be a father, and the rapper is now dropping a series of apparel for kids.

Called PostyCo Kids, the collection will feature ‘pop-art inspired Post Malone graphics’ to make sure even the littlest fans are looking stylish.

In a statement shared with People, a spokesperson said: ‘The PostyCo Kids collection items are cute clothes for little rockstars with sizes ranging from baby and toddler to youth styles.

‘Our little ones and your little ones can rock out in a range of apparel and accessories including a onesie, tees and hoodies featuring the raddest pop-art inspired Post Malone graphics, and more.’

As well as T-shirts with a cartoon version of Post’s face on it, there are also baseball caps and tote bags among the collection.

The collection costs from $25-$65 (£20-£53) and will begin shipping in August, though there is no word yet on whether that i=will be US only or international.

Post had announced the birth of his daughter earlier in the month after casually dropping it in during an interview on Sirius XM’s The Howard Stern Show.

He revealed: ‘I woke up at 2.30 in the afternoon (then) I went and kissed my baby girl.’ When asked whether he meant his girlfriend, he confirmed: ‘Nah, that’s my daughter.’

The Rockstar singer added that he wanted to keep the news low-key, explaining: ‘Yeah, I want to let her make her own decisions.’

MORE : Post Malone confirms his baby daughter’s been born and that he’s engaged in most casual way ever