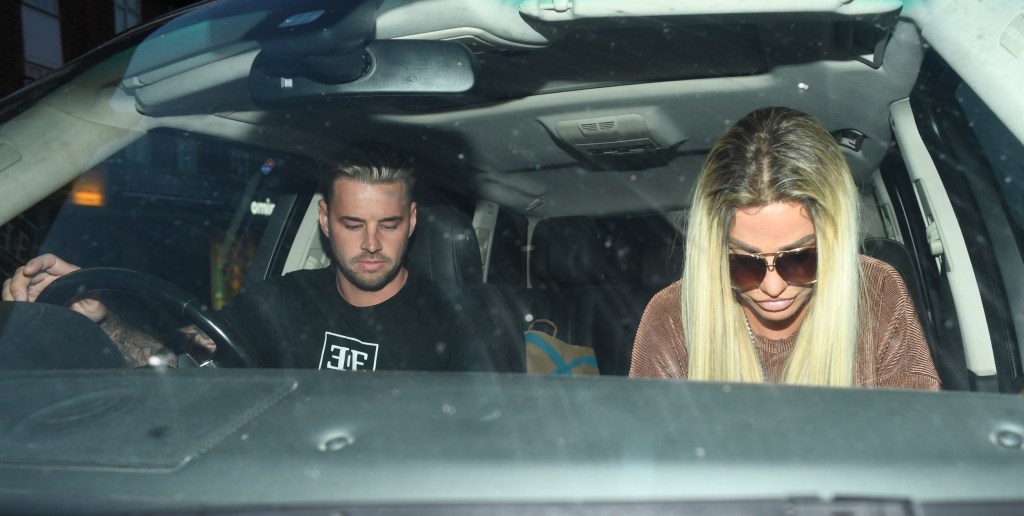 Katie Price has been spotted ahead of her sentencing for breaching a restraining order as she was  picked up from her latest make-up masterclass by fiancé Carl Woods.

The former glamour model, 44, is due in court on Friday and could face up to five years in prison for breaching her restraining order by messaging her ex-husband Kieran Hayler, 35, about his fiancée Michelle Penticost.

Katie called Michelle a ‘gutter s**g’ in the text messages after being banned from contacting Michelle either directly or indirectly for five years in 2019 after the pair had an altercation in their children’s school playground.

Judge Stephen Mooney at Lewes Crown Court told her during a hearing in May: ‘Clearly you have accepted responsibility for this offence and that you indirectly tried to communicate Ms Penticost despite her restraining order against you.

‘I must warn you Ms Price that you are at risk of going to prison.’

Katie had spent the night before the impending sentencing at her make-up masterclass, from which she was picked up by Carl, 33, in his car.

Carl Woods stopped by to collect Katie from her make-up masterclass (Picture: Raw Image LTD/MEGA)
Katie failed to raise a smile as she headed to her car (Picture: SplashNews.com)
Katie’s event had been held at Aisleyne Horgan Wallace’s beauty salon (Picture: Instagram)

The mother-of-five was seen looking straight-faced as her car dealer beau picked her up from Aisleyne Horgan Wallace’s beauty salon which had hosted the event.

Katie has been touring the country putting on make-up classes for her followers, and shared a snap of her with Big Brother star Aisleyne in a photo ares in the new shop.

She told her followers: ‘Thank you @aisthetics1 @aisleyne1 for hosting my London makeup masterclasses tonight. Loved meeting everyone & had a fabulous evening with you all xx.’

As well as her sentencing for breaching her restraining order, Katie also faces further court visits after a hearing about her £3.2million debt was pushed back to 2023.

Katie, who was once worth £40million, had agreed to a repayment plan with creditors and the court was due to hear an update on her progress on June 7, but the case has since been postponed to February 2023.

MORE : Katie Price supported by Carl Woods as she arrives at court for sentencing after pleading guilty to breaching restraining order

Stock Market: Suez Canal Update! Floating!
When celebrities come out, they make it easier for the rest of us to do the same