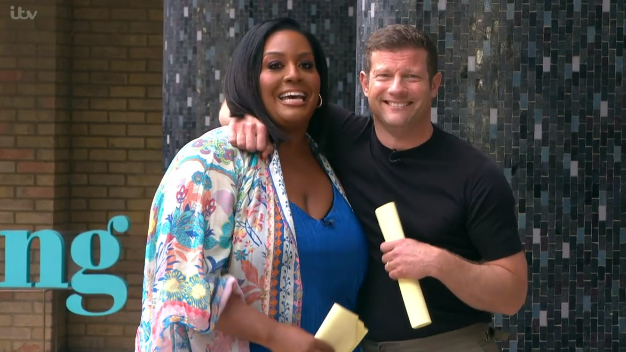 Alison Hammond was left in tears as she praised the ‘gift’ of representation after watching a Black woman perform an iconic track from musical My Fair Lady.

At just 25 years old, Amara Okereke has already starred in the likes of Les Miserables and has now clinched the leading role of Eliza Dolittle in the West End performance of My Fair Lady.

A character made famous by Julie Andrews, Amara gave an expert performance with the ensemble cast on Friday’s episode of This Morning, as presenters Alison and Dermot O’Leary watched on.

After the beautiful rendition of Wouldn’t It Be Loverly came to an end, Alison was visibly emotional as she congratulated Amara on her achievement, ending up in tears as she spoke.

‘I’m so emotional. I can’t believe how emotional I am just watching that!’ she admitted, wiping her eyes.

‘Seeing a Black woman in that role, which I’ve watched since I was a child… I never thought I would ever see anything like that,’ she admitted.

Alison was comforted by pal and co-host Dermot after becoming tearful (Picture: ITV)

Alison went on to tell Amara: ‘Doing that role, the representation, what it means to people like me, honestly it’s wonderful. Such a beautiful performance.’

Still emotional, Alison passed the interview to Dermot, who asked Amara how it felt to take on the iconic role, to which she responded: ‘It’s amazing.

Amara admitted she had been as emotional as Alison when she learned she had the part (Picture: ITV)

‘I can’t lie, it’s intimidating to follow in the footsteps of so many iconic women that have played the role,’ she admitted.

‘I feel honoured to even have my name in the same sentence as Julie Andrews to be honest!’

Amara said she was ’emotional’ when she learned she had clinched the role, telling Alison she ‘pretty much’ had the same reaction as the presenter had watching her perform.

Amara and the cast gave a brilliant performance live on This Morning (Picture: ITV)

The actress takes to the stage as Eliza in London’s Coliseum Theatre, with My Fair Lady taking tenure in the iconic venue until late August.

The beloved musical is based on George Bernard Shaw’s play Pygmalion, irst written in 1913.

It has been performed across the world for decades, with Dame Julie playing the role on Broadway and Audrey Hepburn starring in the 1960’s classic film.

If you’ve got a celebrity story, video or pictures get in …read more