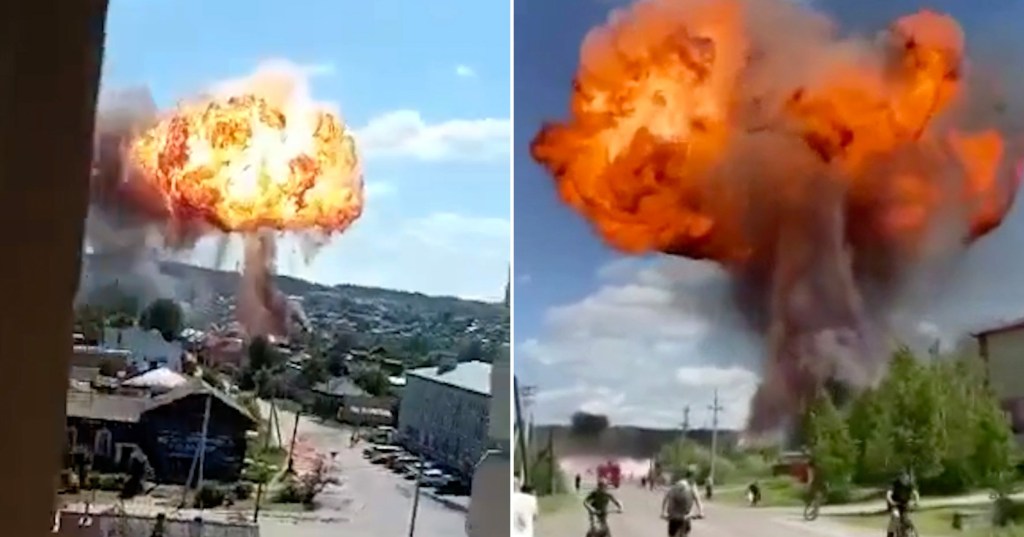 The mystery blasts have been blamed on saboteurs (Picture: east2west news)

A gas explosion in the Russian Urals triggered a huge fireball just hours after a blast at a power plant caused a widespread blackout.

The two incidents are the latest in a series of mystery fires and explosions to rock the country following its bloody invasion of Ukraine.

First, flames erupted at Gysinoozerskaya Hydro-Power Plant from an unknown cause.

The fire sent a huge plume of black smoke rising into the air and caused a blackout across large parts of Siberia.

â¡ï¸A fire broke out at the Gysinoozerskaya HPP in Buryatia this morning. Video from subscribers. pic.twitter.com/ZmMzXO8y6z

Then, three hours later, a truck loaded with gas exploded at a filling station in Talitsa in the Sverdlovsk region, some 2,300 miles away.

Videos caught the moment of the devastating fireball, which caused several people to sustain burns.

Maria, a resident of Talitsa, said: ‘I was at work in the town centre. Suddenly we all shook.

The incident is being investigated, with the cause currently unknown.

A number of fires at strategic facilities have led to suspicions of sabotage attacks by people angry over President Putin’s failing invasion of Ukraine.

Faulty electric wiring was presented as a potential cause, but some speculated there was sabotage involved.

The institute building focused on research related to Russian air and space defence, as well as the development of new anti-aircraft systems.

That same month, a Russian oil depot went up in flames amid claims of cross-border attacks by Ukrainian forces.

And earlier this month, around 125 people were rescued from a burning building in Moscow.

People climbed to the roof of the ten-floor Grand Setun Plaza in Kuntsevo district, around nine miles west of the Kremlin, to escape the inferno.

Accidental fires are common in Russia, where hundreds of blazes are recorded each year due to ageing and poor infrastructure and non-compliance with lax safety standard.

But over the last year, some of the country’s more mysterious fires have been directly linked to the war in Ukraine.

A military enlistment office in the city of Nizhnevartovsk was struck with Molotov cocktails in May amid unrest.

Protesters could be seen approaching the building and hurling their ammunition towards the doors and windows before fleeing the scene.

The Kremlin is yet to offer an insight …read more

Dick Van Dyke proves his humour is as sharp as ever, joking he’s ‘glad to still be here’ aged 96