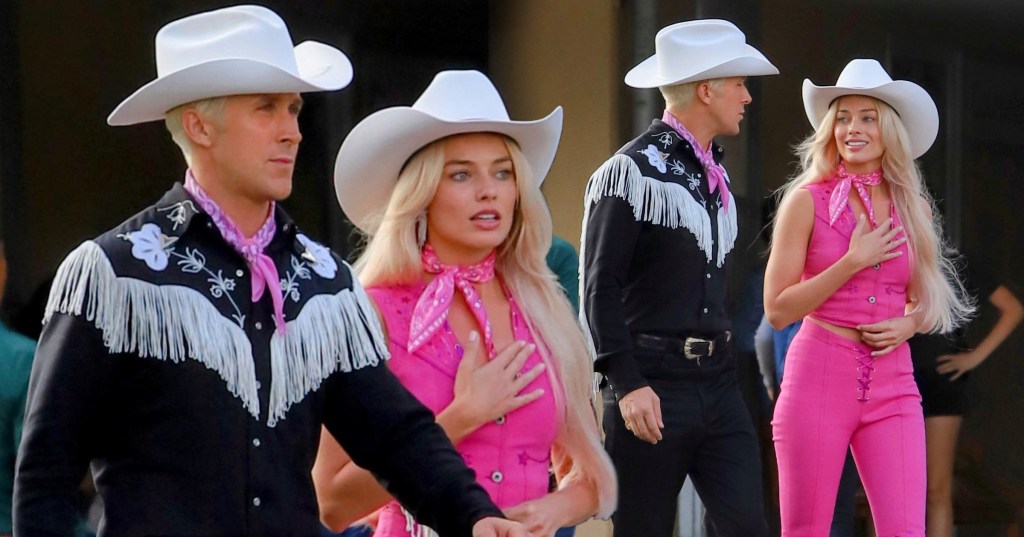 Ryan Gosling and Margot Robbie have been seen sporting fairly unusual outfits as they film scenes for the Barbie movie.

The upcoming film – a live-action revolving around the famous doll, her illustrious career and her love life – is one of the most eagerly anticipated films this year.

Featuring a star-studded cast, with Margot leading as the titular character and Ryan playing her love interest, Ken, Greta Gerwig’s newest project has people waiting desperately impatiently for it to be released.

Fans will have quite a while to wait, however, as filming has only just begun.

Stars Margot and Ryan were seen in character as Ken and Barbie on set in Los Angeles, with Margot looking incredible as the famous doll.

Dressed in a 70s-style hot pink outfit with flared trousers patterned with stars, a pink scarf and white trench coat, the star topped it off with a white cowboy hat, looking very Barbie in the process.

In the snaps, Ken and Barbie stroll down the street together, looking perfectly matched in their genuinely outrageous outfits.

Margot can be seen grinning and touching her hand to her chest as the pair speak, however her face appears to drop in second photograph.

In another photo, the doll – who has worked as everything from a vet to a princess since her creation in 1959 – gestures with her hands as she tries to explain something.

Notably, Barbie and Ken are the only characters dressed like, well, Barbie and Ken, with people in the background looking as normal as you would see on any street.

Official portraits of the pair, released earlier this month, see then hanging out at Barbie’s all-pink dream house, with Margot in her all-pink car – but perhaps it’s not a Barbie World after all in this upcoming film.

Stock Market: Suez Canal Update! Floating!
Get the glow: Expert tips and tricks to help your skin look lit from within