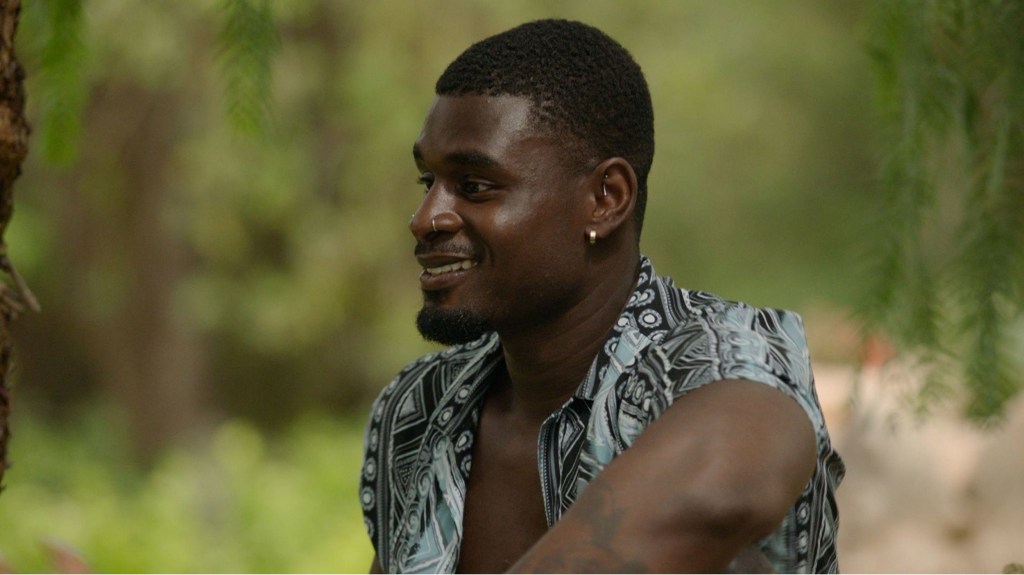 We couldn’t cope with the cuteness (Picture: ITV)

Love Island fans struggled to hold it together after Dami Hope gushed over his budding romance with Indiyah Polack during his date with Antigoni Buxton.

Following Amber Beckford and Ikenna Ekwonna’s exit from the villa, Dami, 26 and Indiyah, 23, have been confidently exploring the spark between them.

During Wednesday’s episode, singer Antigoni, 26 enjoyed a triple date with Dami, Davide Sanclimenti and Jay Younger, however Dami respectfully made it clear there was one girl on his mind.

Enquiring about where things stand between him and Indiyah, Antigoni asked: ‘Have you guys kissed?’

‘Have you seen me?’ he Dami joked.

‘You think I wouldn’t kiss her by now. Come on sis, keep up. I just feel like, you know when you can look at someone across a room just with your eyes and you just feel those little jitters.’

Dami couldn’t stop gushing over Indiyah and fans were here for it (Picture: ITV)
We are excited to see what lies ahead for these two (Picture: ITV)

‘And she’s so beautiful as well,’ Antigoni added. To which Dami agreed.

The ‘wholesome’ moment didn’t go unnoticed by fans, and they quickly took to Twitter to address it.

‘Awww Dami is really talking about how smitten he is with Indiyah during his whole date with Antigoni… ENERGY!!’ one person wrote.

‘Dami spent his entire date with Antigoni speaking about Indiyah?? Yeah that man has FALLEN,’ another added.

Love this for Indiyah! Dami is remaining respectful towards her even on a date. He kindly friend zoned Antigoni #LoveIsland

Yâall see how dami x Antigoni talks about Indiyah ??? I was smiling all through and my ship is intact ð¥°ð¥°ð¥°ð¥° #LoveIsland

dami talking about how gorgeous indiyah is on the date with antigoni >>> #LoveIsland pic.twitter.com/WzPxmhmSoh

Antigoni telling Indiyah Dami is super into her after their date. Yeah I love this for Indiyah ð¥ºð¥º #LoveIsland

antigoni telling indiyah immediately that dami is definitely into her after their date makes me like her 10x more shes such a sweet person omg #LoveIsland pic.twitter.com/ffN1IB1G04

Dami used part of his date with Antigoni to talk about Indiyah, I know thatâs right. #LoveIsland pic.twitter.com/TJYEL4v94V

During her debrief with the girls, Antigoni reassured Indiyah that Dami was into her, but revealed that her flirtiest date was with …read more

Moscow threatens Lithuania after it blocked goods from reaching Kaliningrad

Dear Frankie Grande: What is the best way to come out to my dad?