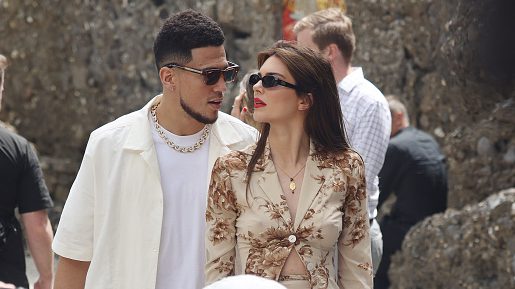 Kendall Jenner has reportedly split from Devin Booker, her boyfriend of two years – but there is said to be chance of a reconciliation for them.

The couple, who were first linked in April 2020, are said to have called time on their romance after discussions about the future.

‘Kendall feels like they’re on different paths,’ one source said.

Another told ET that the pair ‘have had discussions about their future but they are not on the same page.’

One source told E! that they had a lovely time together during Kourtney Kardashian’s wedding but ‘once they got back, they started to feel like they weren’t aligned and realized they have very different lifestyles.’

However, the insider added: ‘They both hope to make it work, but as of now, they are split.’

Model Kendall and NBA star Devin have kept their relationship relatively private, but have opened up on it more in recent months.

While they were first linked in spring 2020, they didn’t go public with their romance until February 2021.

They were spotted on cosy dinners and double dates with Justin Bieber and his wife (and Kendall’s best friend) Hailey, before making things Instagram official on Valentine’s Day, when the model shared a snap of herself cuddling her beau on the kitchen counter – as you do.

Meanwhile, the 26-year-old has been a regular attendee at Devin’s basketball games.

She told Jimmy Fallon in a rare comment about her relationship: ‘I watch every game unless I have—last night I had a dinner but all my friends and family know that I like sit with my phone wherever I am.

‘I’ve always been a fan of basketball since basically with Khloé [Kardashian, I remember we used to go to all the Lakers games when I was really young so I’ve been a huge fan of the NBA for a really long time.’

She also told the talk show host of Devin’s sweet bond with her niece Stormi: ‘They have an amazing relationship.

‘She has the biggest crush on him, and I’m jealous sometimes. I’m like, “Stop — can you guys not?”‘

Devin, 25, also began to open up on the romance in interviews.

When asked whether he finds it hard to have his private life in the limelight while dating the model, the NBA athlete told WSJ Magazine: ‘I wouldn’t say hard.

‘Honestly, I’m enjoying life to the fullest, and that came off my tongue so easily because it wasn’t always this way, but I feel like I’m in a good place right now.

‘I love my family, I love …read more