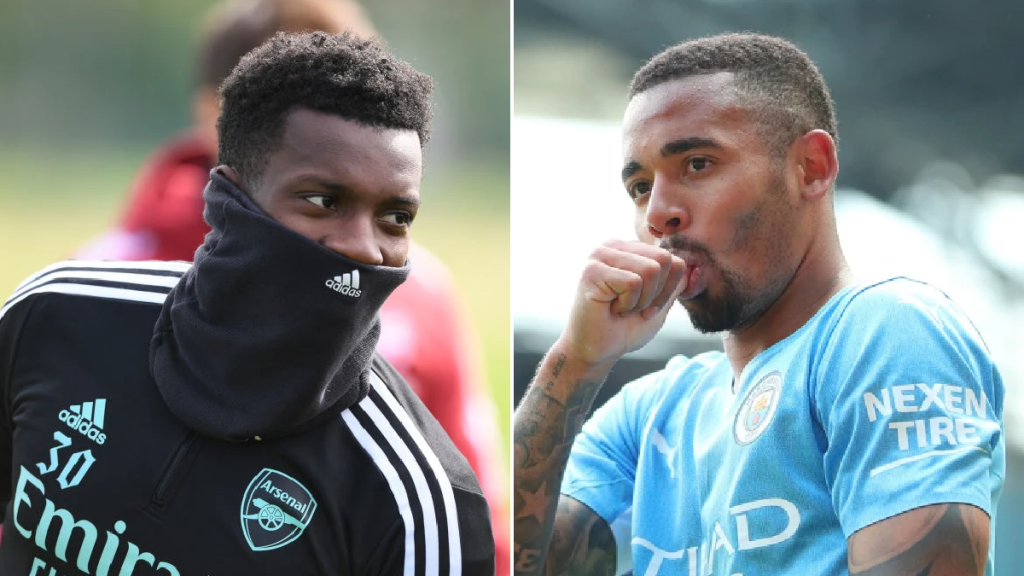 The 23-year-old won’t give up his place in the starting XI without a fight (Pictures: Getty)

Eddie Nketiah has sent a warning to potential new Arsenal team-mate Gabriel Jesus that he will ‘relish the challenge’ of extra competition and is ready to fight to keep his starting role.

Signing a new striker is Mikel Arteta’s number one transfer priority this summer, with the Gunners having sanctioned the exits of both Pierre-Emerick Aubameyang and Alexandre Lacazette in the last six months.

Jesus is their top target and Arsenal are believed to be in advanced talks with Manchester City over a £50million deal, with the player keen on a move to the Emirates.

But, if Nketiah has his way, the Brazilian may not walk straight into the first-team, with the young Arsenal forward – who was handed a bumper new contract – making it clear that he intends to keep the starting role he earned at the end of last season.

Asked about the prospect of Arsenal bringing in a new striker, Nketiah told the Telegraph: ‘Every team needs a squad to compete. The club is always looking for ways to strengthen.

‘They have extended my deal and they have done that for a reason.

‘Whoever comes in, you relish the challenge. You make them feel welcome, and then you fight and compete.’

Nketiah played a crucial role for Arsenal in the run-in last season as the Gunners narrowly missed out on a place in the Champions League, netting braces against Chelsea and Leeds and also scoring on the final day of the season against Everton.

Despite a peripheral role for much of the campaign, the 23-year-old bagged 10 goals in all competitions – getting on the scoresheet every 113 minutes.

By comparison, Jesus, who is two years older, netted 13 times in all competitions for City last season, as well as laying on 11 assists, averaging a goal involvement every 107 minutes.

Nketiah always had faith in his ability to score regularly at the top level, though was given precious few opportunities by Arteta initially – not starting a Premier League match until April – but feels he has worked hard on his game and now finally has a platform to showcase his talent.

He continued: ‘When you get a run of eight games in the first team, you get that database and platform to show everything you can do.

‘I have worked a lot with the manager on playing with my back to goal, on the spaces to drop into and link play. Of course it has been developed. But at the same time you don’t get here by just standing in the penalty box and scoring a goal.

‘People are always going to say things, but I know what I can do. The people that have played with me, played against me, the coaches that have worked me, I know how they feel about me.’

Emilia Clarke confirms Game of Thrones spin-off with Kit Harington as Jon Snow ‘is happening’: ‘He’s told me about it’