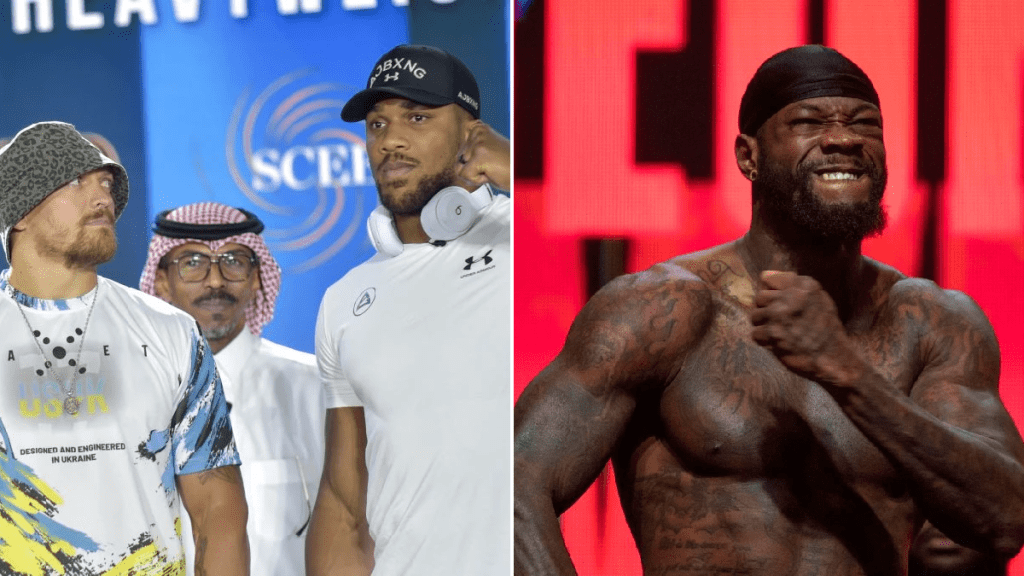 Wilder is backing Usyk to do the job again (Picture: Getty)

Usyk travelled to London and outpointed Joshua with a masterful display last September, taking the IBF, WBO and WBA titles in the process.

Joshua is bidding to reclaim those belts when he takes on the undefeated Ukrainian again in Saudi Arabia on 20 August.

In his last fight on Saudi soil, Joshua avenged his only other professional defeat with a win over Andy Ruiz Jr, having lost his belts to the American six months earlier in New York.

While Joshua is intent on becoming a three-time champion, Wilder believes Usyk will walk away the victor once again.

Joshua and Usyk were in Saudi Arabia this week (Picture: Getty)

‘I’m going with Usyk. A lot of people are. But you know what I mean, it’s boxing at the end of the day, so the world will see. But my pick is Usyk.’

Joshua was comprehensively outboxed in the first meeting last year, making major changes to his corner as a result.

Long-term trainer Rob MccCracken is no longer part of the picture with Angel Fernandez stepping up. Robert Garcia has also joined the camp.

‘The great thing is I’ve got a second chance,’ Joshua said this week at a press conference in Jeddah.

‘What got me into boxing in the first place – when I was a youngster I got in a little bit of trouble every now and again and I was blessed with a second chance and I found boxing. And I took it with both hands. So if you know me and a lot of my story, you know I’m the comeback king.

‘You can put me down. But it’s difficult to keep me down.’

MORE : Oleksandr Usyk explains why he won’t be using war in Ukraine to inspire him to victory over Anthony Joshua

Nurse ‘plied boy, 14, with booze then groped and sexually assaulted him’

Teacher becomes a food waste hero after buying and distributing reduced price food and saving 60,000 items from being binned