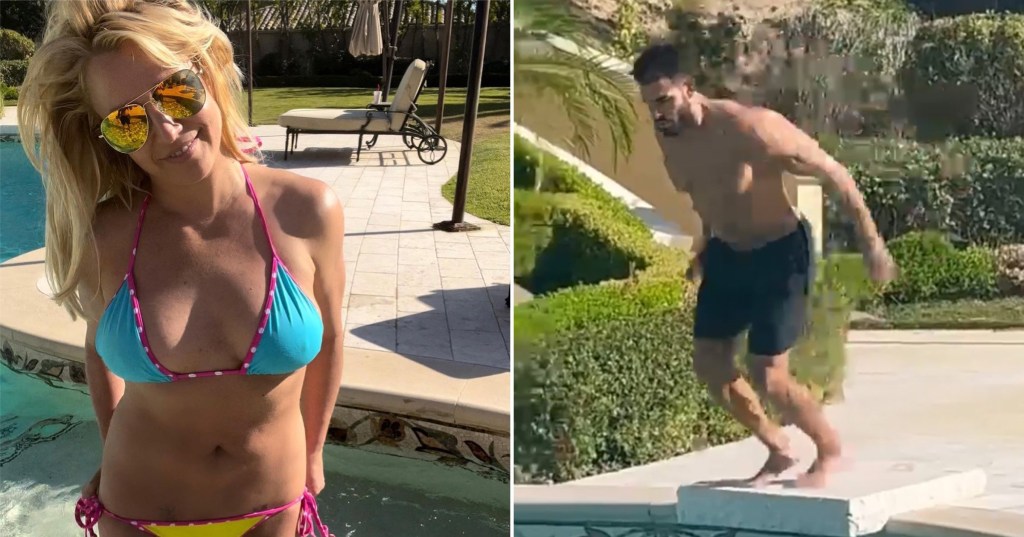 Britney Spears has returned to Instagram to let fans know the reason for her absence was down to her moving house.

The singer, 40, had disappeared from the platform following her wedding to Sam Asghari, 28, sparking concern from her followers.

However, Britney has revealed that the reason for her absence is not that she and her new husband have been honeymooning – they’ve actually moved into another lavish property instead.

Sharing photos of her by her new pool in a colourful bikini as well as a video of Sam diving in to the cool water, she explained: ‘Haven’t been on my honeymoon yet… got married and moved into a new house around the same time… not the smartest thing to do…

‘Oh well it’s coming together… it’s so weird I wake up and everything is new… new pool… new kitchen… new bed… I think I’m in shock!!!’

She added: ‘Figuring out a couple of things… I definitely like being outside but I also like being inside too… my yard is sick so my dogs are in pig heaven!!!

‘Change is so great … as my kids say … that’s fetch!!! Since I’m so uncool… yes I will keep sharing… it keeps me on track… my family has always had a way of letting me know… well I guess I have a pretty good way as well!!!

‘I took a nice dip in my pool… it’s so bright and it has a nice chill spot… and a slide… I went down it 4 times already… it’s hella fast!!!’

Britney and Sam got married at the start of the month (Picture: J. Merritt/Getty Images for GLAAD)

Britney added that married life is treating her well, closing off her post with: ‘I cut all my hair short and my husband just made me a steak… life is good.’

The Toxic singer and her actor beau had tied the knot at her old house at the start of June, in front of a small gathering of guests, which did not include any of the Spears family.

How to check whether your train has been cancelled

Before the ceremony got under way, Britney’s ex-husband Jason Alexander showed up unannounced and attempted to crash the wedding, before being arrested.

Britney and Sam shared several stunning photos from their wedding but the singer later deactivated her account for several days.

From George Ezra to Chemical Brothers: Who could be playing Glastonbury’s ‘secret sets’ this weekend?