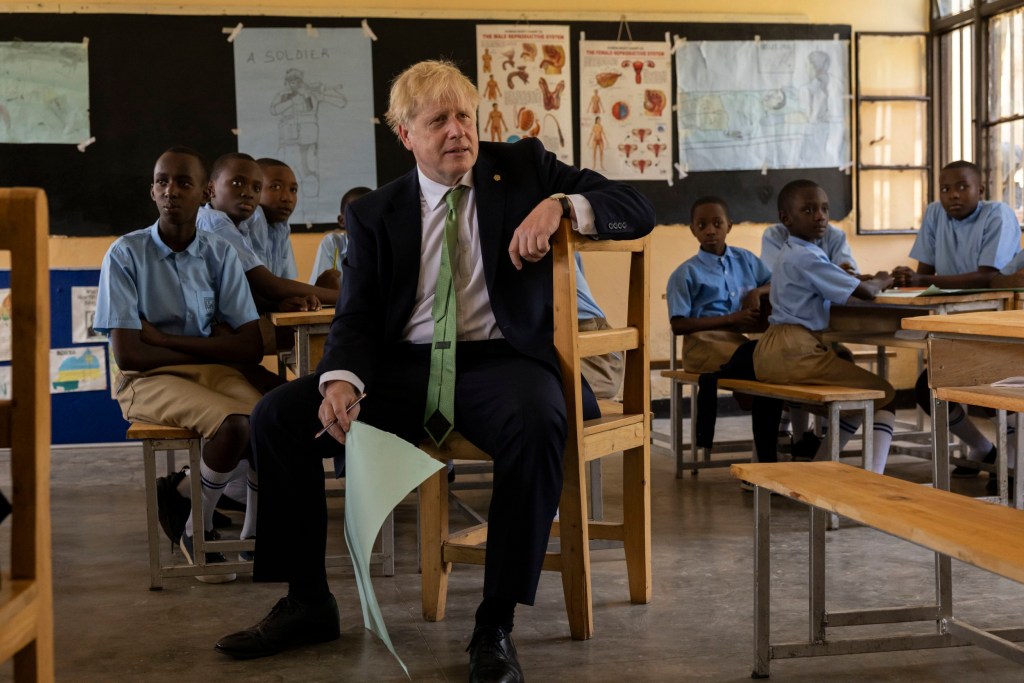 Boris Johnson joins a lesson during a visit to the a school in Rwanda’s capital, Kigali (Picture: AP

Boris Johnson says he’s prepared to defend the ‘obvious merits’ of his Rwanda deportation policy to Prince Charles, who isn’t the biggest fan.

The pair are set to meet for talks over cups of tea in Kigali tomorrow for the Commonwealth Heads of Government Meeting (Chogm) leaders summit.

Many are expecting the encounter to be awkward, after the Prince of Wales reportedly described the Home Office’s deal with Rwanda as ‘appalling’.

The new scheme will see asylum seekers who arrive in the UK through ‘illegal’ routes given a one-way ticket to Rwanda for resettlement.

It is hoped the plan will break the business model of people smugglers taking people across the Channel in tiny and inadequate dinghies.

But campaigners have raised concerns about Rwanda’s human rights record – which Johnson didn’t raise with president Paul Kagame as they met earlier today.

The United Nations have said the scheme violates international law, while activists say the idea of criminalising asylum seekers based on their mode of arrival betrays the very principle of asylum.

Prince Charles caused some discomfort for No 10 after reportedly calling the Rwanda deal ‘appalling’ (Picture: PA)
Camilla, Duchess of Cornwall kisses the PM’s wife Carrie Johnson at a Violence Against Women and Girls in Kigali (Picture: Getty Images)

But the Prime Minister has struck out at ‘condescending’ opponents of his plans and hopes his trip to Rwanda might change people’s conceptions of the country.

Johnson and Charles’s conversation will be their first since it was reported the prince described the policy as ;appalling’ in private remarks.

The PM said he is ‘delighted that Prince Charles and everybody is here today to see a country that has undergone a complete, or a very substantial transformation’.

In an interview with broadcasters at a school in Kigali, the Prime Minister was asked if he is willing to defend the policy if Charles raises it.

‘So yeah, of course, if I am seeing the prince tomorrow, I am going to be making that point.’

No 10 has tried to dampen down expectations that Charles and the PM are headed for a fight (Picture: REX/Shutterstock)
Johnson says he is prepared to defend the Rwanda deportation plan if the Prince of Wales mentions it (Picture: Reuters)

Speaking to reporters as he prepared to fly to Rwanda, Johnson had said he hopes the trip would ‘perhaps help others to shed some of their condescending attitudes to Rwanda and how that partnership might work’.

But contrary to Johnson’s remarks, his official spokesman tried to dampen down expectations he was headed towards a clash with Charles.

He said it was ‘unlikely’ the PM would bring up the policy, …read more