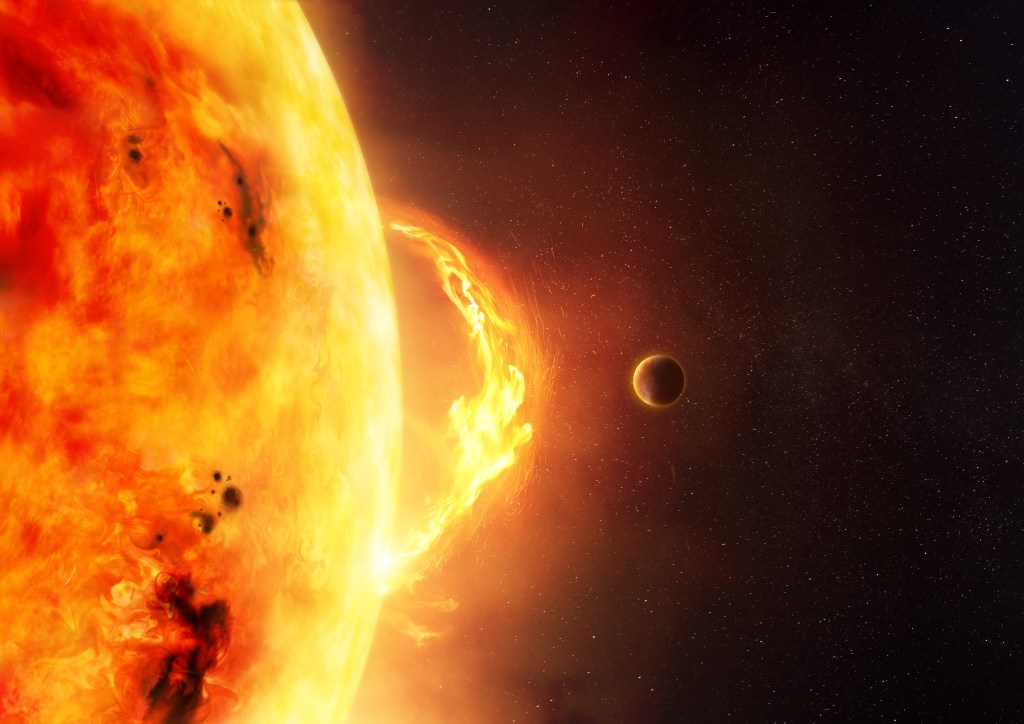 About this particular sunspot, experts say there’s ‘No need to panic’ (Picture: Nasa)

A significant solar flare may be incoming as a fast-growing sunspot has doubled in size in 24 hours.

The sunspot called AR3038 is nearly triple the size of Earth and could potentially send out medium-strength M-class solar flares toward our planet.

In April, a warning was issued after the sun threw out its strongest solar flare in half a decade. That was an ‘X-class’ flare, the strongest category measured by scientists and it did not cause much damage. So, an M-class flare is likely to be harmless.

This sunspot could cause a Coronal Mass Ejection (CME), which will give people a chance to see the sky lit up with aurora.

What is a sunspot?

Sunspots are areas on the Sun’s surface that appear darker than surrounding areas because they are cooler, according to Nasa. This is because they form where strong magnetic fields prevent heat within the sun from reaching its surface.

Solar flares, which typically arise from sunspots, are a sudden explosion of energy caused by tangling, crossing or reorganizing of magnetic field lines near sunspots.

However, the National Oceanic and Atmospheric Administration’s (NOAA’s) Space Weather Prediction Center, which monitors solar flares and other outbursts, has not issued any current aurora alerts for Earth.

About this particular sunspot, experts say there’s ‘No need to panic’.

‘The sunspot’s size and growth rate are fairly normal. This is what sunspots do’, Rob Steenburgh, acting lead of the NOAA’s Space Weather Forecast Office told USA Today News.

‘Over time, generally, they’ll grow. They go through stages, and then they decay,’ he said.

What is a solar flare and what happens when it hits earth?

The sunspot has doubled in size in 24 hours (Picture: Nasa)

According to the European Space Agency, a solar flare is an explosion that happens on the Sun when energy stored in ‘twisted’ magnetic fields (which can usually be found above sunspots) is released.

These can heat electromagnetic material to millions of degrees in just minutes, resulting in a burst of radiation across the electromagnetic spectrum, including from radio waves to gamma ways and X-rays.

Solar flares are classified by scientists according to how bright they are in X-ray wavelengths.

They are also used to try and predict solar activity on earth and in space.

The effect of solar flare on Earth depends largely on what size the solar flare is – nothing may happen at all if they are very small, but larger ones could have catastrophic consequences.

The smallest, C-class, are unlikely to make much impact on Earth, medium-sized ones – known as M-class, could …read more

‘Unretirement’ is on the rise as older workers return to work