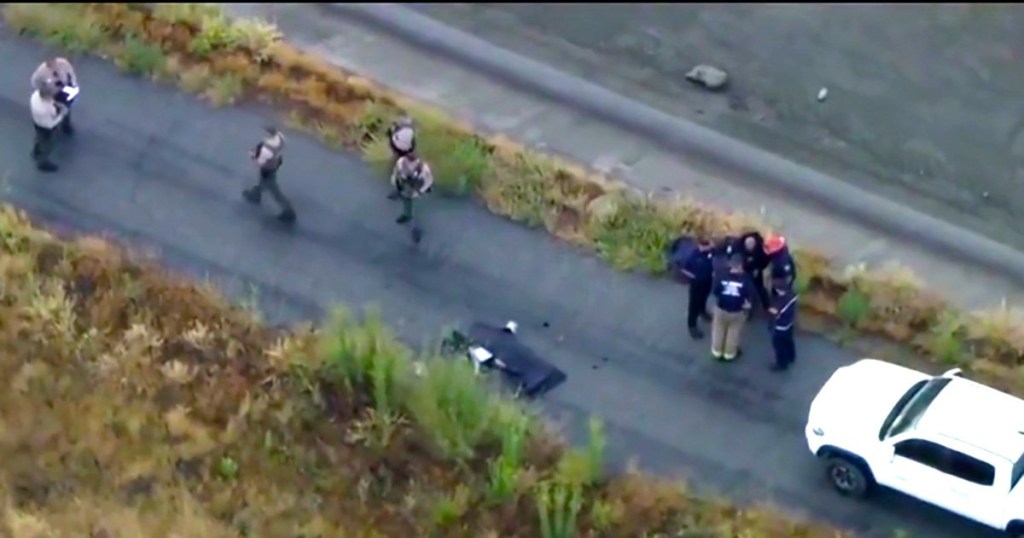 A woman and her two dogs were found lying by the San Gabriel Riverbed after an apparent lightning strike (Picture: FOX 11)

A woman and her two dogs were killed after being struck by lightning during a morning walk.

All three were along the San Gabriel Flood Control District on Wednesday morning when they were apparently hit, according to the city of Pico Rivera in California.

Police and emergency responders were called to the area around Mines and Rimbank avenues near the San Gabriel River around 9am, according to officials.

The woman and her two canines were discovered lying near the riverbed. First responders tried to revive her and her pups, before pronouncing them dead.

They were apparently struck as lightning storms passed through Southern California.

The lightning strike caused an indentation mark on the pavement.

An investigation was ongoing and the woman was not immediately identified pending notification of next of kin.

‘We should all be cautious with this activity that’s in the area,’ Pico Rivera City Manager Steve Carmona told FOX 11. ‘We want everybody to be careful. There’s a lot of instability in the air. Just be careful and do your best to stay indoors at this time.’

Some residents were frightened by the incident.

‘I’m scared,’ Mary Perez, who lives near the site of the strike, told ABC 7.

An investigation on the apparent lightning strike has been launched (Picture: FOX 11)

‘I told my granddaughter and her friend, she’s not walking to school, I’m taking her. I think more about the lightning. Not that I never thought about it. I didn’t think it could really do that. It’s just awful.’

The woman and her dogs died as a summer storm has continued to impact the Southland with thunderstorms, gusty winds and lightning closing some beaches. The region also has an elevated fire danger alert.

A fatal lightning strike last occurred in the Southern California in 2014, when a 20-year-old man was killed.

Woman shares ‘stay-at-home-girlfriend’ dating rules, including never paying for meals or pouring her own wine

Is Love Island on tonight?